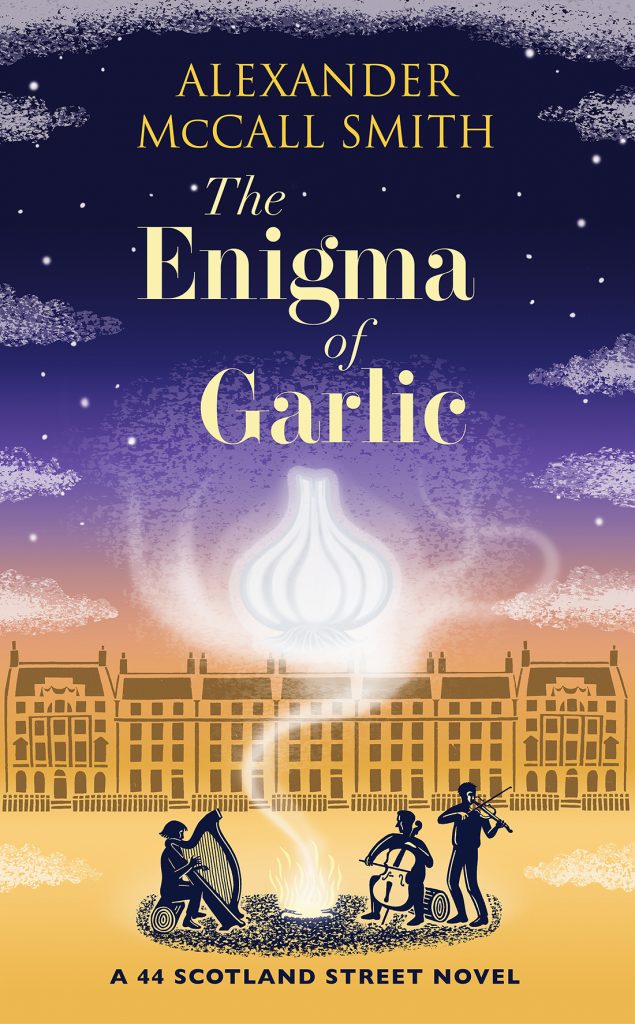 Domenica Macdonald, anthropologist, resident of Edinburgh, observer of humanity and believer in the old-fashioned and increasingly rare virtue of tolerance, looked out of her window onto the cobbled street below and wondered what to cook for dinner. It was not a question on which she would spend much time – nor was it one with which she engaged emotionally. Domenica was a competent enough cook, but she had never been able to develop much enthusiasm for time-consuming recipes or for the cults surrounding some of the better-known chefs. She was aware of the prominent culinary names of the age, of those described as celebrity chefs, but took no real interest in them or in their doings, other than to be disappointed, in some cases at least, by their rude behaviour. The people who worked in kitchens had not signed up for the Foreign Legion – an organisation in which recruits could hardly complain if they were shouted at; kitchen staff should not have to put up with being sworn at and threatened in their workplace. The fact that you can make a tasty sauce is no ground for thinking you have the right to belittle those who help you make it. There was no excuse for impoliteness, Domenica would like to remind them: politeness cost nothing, did not smell, and there was always enough of it to go round.

Domenica did almost all the cooking in her household. Although her husband, Angus Lordie, a portrait painter of some distinction, did not belong to that generation of men who were completely incapable in the kitchen, his repertoire was nonetheless somewhat limited. In his bachelor days, Angus had relied on a small number of dishes that he prepared for himself and that he was able to make without reference to any recipe book. These included a pasta dish (spaghetti aglio e olio); Macsween’s haggis, served with mashed potatoes, neeps and peas; and kedgeree made with Arbroath smokies. The ingredients of these concoctions were few in number. Spaghetti aglio e olio, as the name suggested, required only spaghetti, garlic and olive oil. You cooked the spaghetti in another readily available ingredient – water – and then you placed it in heated olive oil to which you had added copious quantities of chopped garlic. That was all, and yet the name – aglio e olio – was so poetic, so full of Italian promise.

Haggis was perhaps even simpler. You obtained your haggis and you put it in the oven, wrapped in foil. Then you took it out and punctured the skin, having boiled the vegetables in advance. That, again, was all that you had to do, and all this could easily be accomplished, Angus thought, by mere men, possessed of no further culinary skills than those elucidated in a small and well-thumbed book that somebody had once given him entitled Cooking for Men.

It was not an unhealthy or unpalatable diet but it was with some relief that, after their marriage, Angus fell into the habit of allowing Domenica to prepare their evening meal. He was aware, though, that there were potential objections to this arrangement, and that the days when men could sit back and rely on being uncomplainingly cooked for by women were over. It was the duty of men to pull their weight domestically, and Angus fully accepted that. It was just that between the recognition of a duty and its fulfilment there was often something of a gap. We all want to be good, he told himself; we all want to do the right thing; but it’s not always easy. St Augustine had had something to say about that, he thought.

“I must get myself organised,” he said to Domenica. “I must do more in the kitchen. I really must. I enjoy cooking, you know.” Domenica smiled. One had to encourage men in their inchoate schemes of self-improvement. “Yes,” she said.

“That’s a very good idea, Angus. The kitchen, you may have noticed, is over there.”

But somehow Angus had never managed to put this vague intention into practice, and the task of cooking was shouldered by Domenica, just as it is by so many wives whose husbands express an intention to sharpen their culinary skills but somehow never get round to it.

Now, as she looked down on Scotland Street, Domenica decided that they would that evening have tomato soup out of a can, followed by scrambled eggs served on toast. This was plain fare – nursery food, as Angus sometimes called it – but it had the merit of a preparation time of five minutes, at the most. Angus would like it and for her part she had more pressing concerns than those of the kitchen. Domenica was currently working on a scholarly paper, An ethno-linguistic analysis of a Scottish sub-dialect: conjectures and possibilities. The paper itself was already written and accepted, in principle, for publication in a reputable scholarly journal. The journal editors, though, had passed on to Domenica various proposals for change made by the peer reviewers to whom the paper had been submitted, and these would need to be attended to.

Reviewers could be irritating; while some of them were helpful and approved publication without change, others seemed to feel it necessary to suggest amendments, even where none were strictly necessary. Domenica was convinced that this sometimes happened simply because reviewers felt that they had to do something to justify their involvement in the whole process. It was a familiar story in so many fields of activity. If you appointed a bureaucrat, for example, then you must expect the bureaucrat to create rules and think of reasons for not doing things. That is what bureaucrats do. If you bought a dog, then you must expect him to bark. That is what dogs do.

It was a matter of regret, Domenica thought, that people felt the need to do things. There were many situations, she felt, where inaction would be a perfectly good policy, where things could be left where they were without any attempt at improvement. The adage that what was not broken should not be fixed was derided as folk wisdom, and yet it was, Domenica thought, profoundly true. There was nothing wrong with inaction, in spite of the widespread belief that everything had constantly to be adjusted and rearranged. Things might be left exactly where they were, unaltered by interference. After all, there was no essential merit in change, in spite of the belief that disaster would follow unless all our arrangements were constantly revisited and reorganised.

Domenica had recently come across a biography of Calvin Coolidge, the American president who served so unobtrusively between 1923 and 1929. It was Coolidge of whom Dorothy Parker, when told of his death, asked, “How can they tell?” Dorothy Parker was extremely witty, but in this case her amusing observation obscured the fact that Coolidge, who was undoubtedly dull, was also a fairly successful president – for the very reason that he did nothing, and said even less. That would not be possible today, of course. People had to do things, and would not rest until they had done them.

Domenica turned round from her window and caught her husband’s eye. “I’ll cook dinner this evening, Angus,” she said. “Nothing fancy.”

This extract is from The Enigma of Garlic, the latest in the 44 Scotland Street series.

A Story for October: ‘By Post’ from Tiny Tales
A Story for January: ‘Monty, Tiger, Rose, etc’ from The Exquisite Art of Getting Even