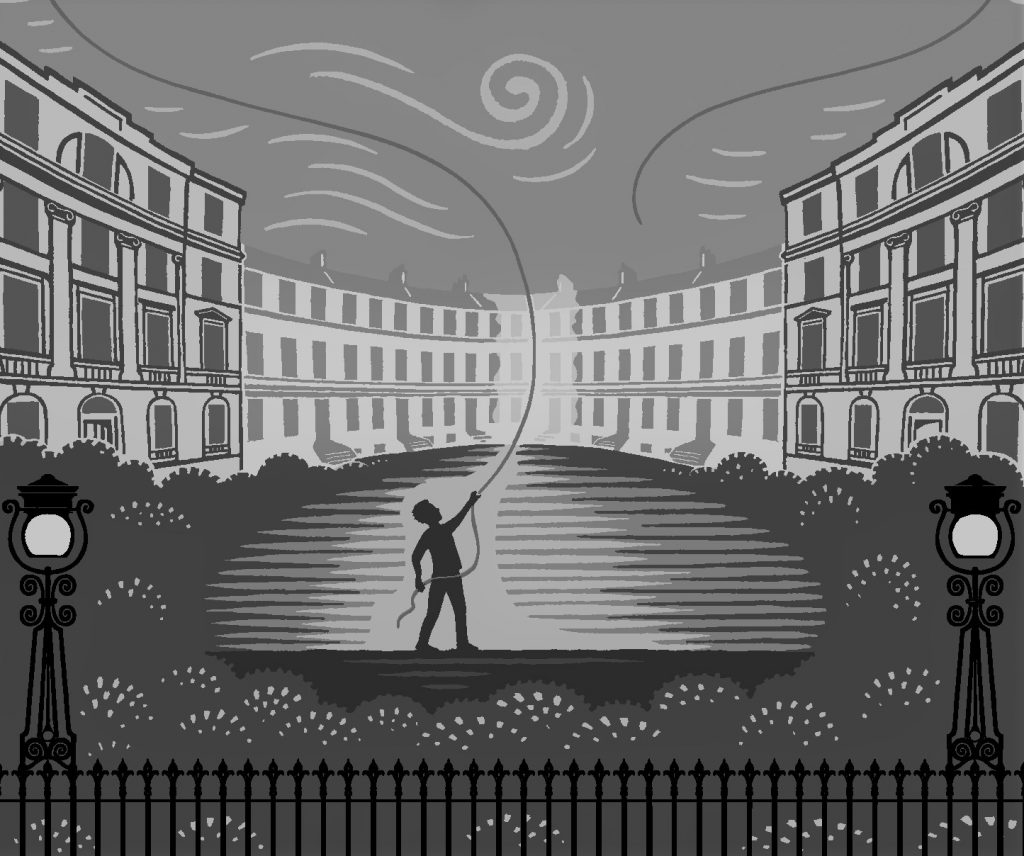 Angus Lordie, portrait painter, citizen of Edinburgh, husband of Domenica Macdonald and owner (custodian, perhaps, according to modern sensibilities) of Cyril, the only dog in Scotland to have a gold tooth; that Angus Lordie stood in a room of his flat at 44 Scotland Street, wondering what to wear.

All the clothing he possessed was either hanging from a number of wooden hangers or was neatly folded and stacked away in a series of drawers within a large wardrobe, called in the second-hand trade, brown furniture. Nobody, apparently, wanted brown furniture any longer, as it was considered too cumbersome, not to say too dull, for contemporary tastes. If the Scottish diet had become Mediterranean, then Scottish furniture had become Scandinavian – light and minimalist, made by IKEA (or is it ABBA?), consigned to its owners in flat boxes and requiring to be assembled before use – and then re-assembled, once the instruction booklet had been read. This was the very opposite of Angus Lordie’s wardrobe, as gloriously over-engineered, in its way, as the Forth Railway Bridge, and of similar vintage.

This wardrobe consisted of a series of drawers in which Angus kept what he called his accoutrements: his shirts and socks, handkerchiefs, ties, vests and so on, while jackets and trousers were hung from a railing on the opposite side. His kilt, along with his sporran, hose, kilt pin and sgian dhubh were also in one of the drawers, protected, ineffectively, by moth-repelling balls of cedar.

He had two suits – a dark one that had been made for him twenty-two years ago and that was described by Domenica as his kirk suit, and a three-piece, tweedy outfit that Domenica had disparagingly labelled his bookie’s suit. Neither of these descriptions was entirely helpful: the kirk suit was well-made and discreet, rather than Calvinist; the bookie’s suit was not in the least bit flashy, being made of Harris Tweed and designed to withstand Hebridean weather – the horizontal rain and Atlantic gusts that beset the West of Scotland, and the North, South, and East for that matter. There was nothing wrong with these suits, although Angus seldom wore them. Suits, he thought, might be going the way of men’s hats and ties – both of which were now seen only infrequently on any man under forty. This was a matter of regret, Angus felt, even if he himself was doing nothing to stem that particular tide of fashion.

Alongside the suits were hung four jackets, all of them in frequent use. Two of these were linen, and formed the core of his summer garb, while the others were of an unidentified fabric that Angus referred to as 100 per cent unnatural. They were comfortable enough, though, and went with virtually anything, but particularly with the crushed strawberry corduroy trousers by which Angus signalled his status as a resident of the Georgian New Town, as a member of the Scottish Arts Club, and as a man of artistic bent. If these trousers raised eyebrows amongst the ranks of the staid, then Angus did not care in the slightest. There was no fixed ordinance stipulating that men should wear sober trousers: fund managers; lawyers and accountants could dress in grey and black if they wished – he, as an artist, preferred something livelier.

On the floor of the wardrobe was the shoe rack on which Angus kept shoes other than those in regular use. His regular shoes – described by Domenica as his daily boots – were a pair of brown brogues made by the Northampton shoemaker, Joseph Cheaney. English shoes, Angus maintained, were second to none. They may not have been as elegant as Italian footwear, but Italian shoes would never stand the rigours of Scottish conditions. English shoes were made to last; they were modest, often understated, and they were, above all else, honest shoes. That quality of honesty was difficult to define – in shoes at least – but one knew it when one encountered it. That was why English shoes were still sought after when everything else, as far as Angus could see, was being made in distant, unspecified workshops. Designed in X and made in Y … Angus had never fallen for that particular attempt to sugar the pill of local deindustrialization and the de-skilling that went with it.

The English shoes of which he was proudest was a pair of black brogues, made of soft and supple leather, made for his father by the London firm of John Lobb. Lobb made shoes to measure, and while Angus could not afford the expense of bespoke shoes – the price tag ran effortlessly into thousands – his father, a Perthshire sheep farmer, had been able to do so after a particularly good season at the Lanark stock sales. His prize Scottish Blackface tup, Walter of Glenartney, renowned for his noble bearing, his fine Roman nose, and his contempt for lesser sheep, had broken all sales records and had provided him with the funds to order a pair of Lobb shoes.

By great good fortune, Angus and his father had near-identical feet, and when Angus left school, his father had passed his shoes on to him. Angus had accepted the gift with a degree of concealed embarrassment: at the age of eighteen, when one is busy shaking off parental influence, who wants a pair of bespoke Lobb shoes? At the Edinburgh College of Art at the time, shoes were being worn, of course, but these shoes were concepts or statements, rather than shoes simplicter. So Angus relegated the Lobb brogues to a cupboard and wore, instead, a pair of Hush Puppies of tobacco-coloured suede, threaded with red laces – a touch that met with the whole-hearted approval of his fellow students. “Radical,” they said – high praise in those innocent days.

At a crucial stage in life – somewhere in one’s mid-thirties – the merits of well-made shoes dawn on one, and that was what happened to Angus. He wore the shoes to his father’s funeral, and as he and farming neighbours carried him to his final rest, a tear fell from Angus’s eyes onto the cap of one of the shoes. Not every man, he thought, will live to see such a thing: his tears falling onto a shoe into which he had, both metaphorically and otherwise, stepped.

Alongside the Lobb shoes, in as complete a contrast as could be imagined, was a pair of Belgian shoes, those lightweight, indoor shoes that are made only in Belgium and that are so completely unsuitable for active use. Angus had been given these by Domenica, whose eye had been caught by them on a trip to London.

“You can’t wear them out of doors,” she said, as she presented him with them. “The Belgians, it would seem, don’t get out much.”

Angus smiled. “How drole,” he said.

Domenica accepted the compliment with an inclination of her head. “Belgium is a bit of a mystery to me,” she said. “I don’t feel I’ve ever really grasped it, if you see what I mean.”[1]

[1] Angus Lordie, it may be remembered, was the author of the hymn God Looks Down on Belgium, the first verse of which is: God’s never heard of Belgium/ But loves it just the same;/For God is kind and doesn’t mind/ He’s not impressed by fame.

This is an extract from the upcoming novel, Love in the Time of Bertie, the fifteenth book in the 44 Scotland Street series. Available in the US & Canada in February.

A Story for September: The Joy & Light Bus Company
A Story for November: Australia Deprivation Syndrome