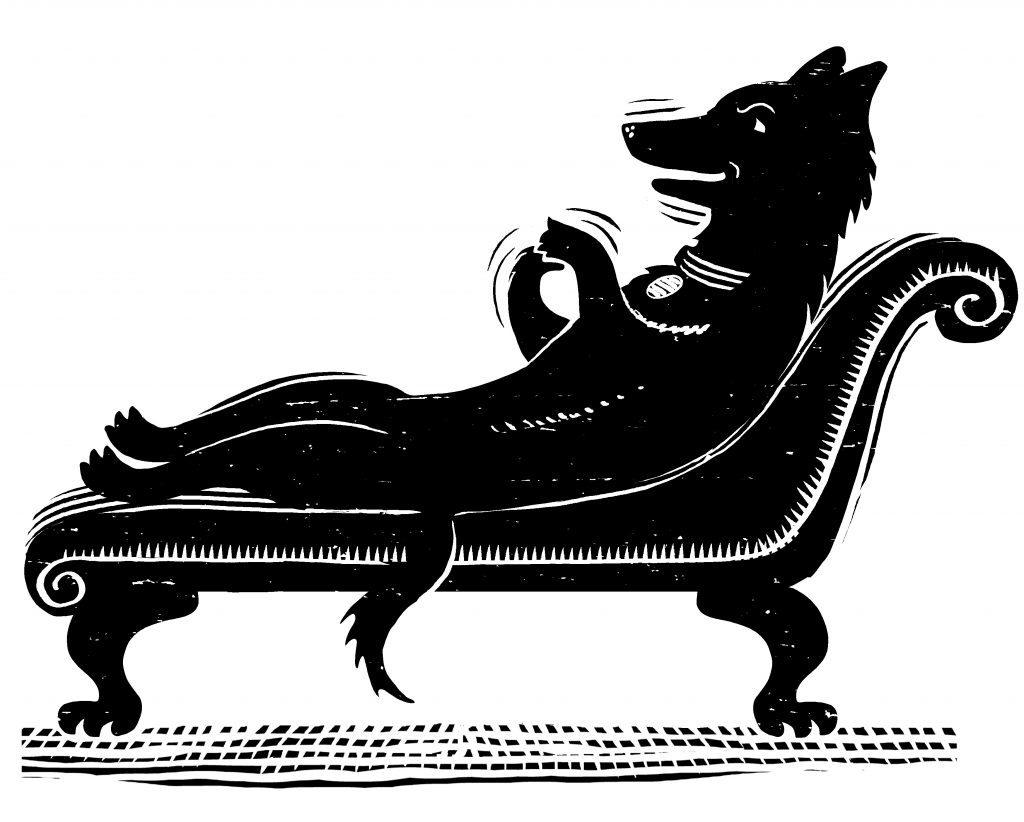 Alexander McCall Smith discusses a new syndrome sweeping the world … or at least sweeping him.

An odd thing has been happening to me. If I consulted a therapist about it, I can imagine the exchange might go as follows:

Therapist: So, what’s the trouble?

(Now, I’m not sure that therapists actually say anything quite as direct as that. For a start, it suggests that there is trouble, which is to prejudge the matter. Of course one may assume that somebody who consults a therapist has some reason to do so – and that means trouble – but that’s no reason for the therapist to draw conclusions before the encounter has even begun.

So, let’s start with something more suitable.)

(That’s better, but not much. Yo is intensely colloquial, and rather than putting the patient at his or her ease, it might just serve to annoy. I, for one, take exception to people who say Yo to me when I have yet to say Yo to them. So, a better approach might be as follows.)

(This is a meaningless exchange, but neither irritates, disturbs, nor conveys anything very much. The real meat is yet to come.)

Therapist:  I understand you’re a writer.

(This is a good start, and may be used even if the therapist has no idea as to whether or client is a writer. Most people plan to write a book at some stage; many even begin to write the book they feel they have in them. Even if they have never written a word, they feel, nonetheless, that they are capable of writing a book and they will be pleased that the therapist has spotted their otherwise hidden talent.)

Self: Well, since you mention it …

Therapist: Do you suffer?

(This is a question that many people ask writers, and therapists might as well ask it too. A few years ago I was in the United States, giving a talk at a community college. At the end of the session a young man in the back row asked me “Do you suffer?” I was momentarily taken aback, and then I realised that this is a perfectly reasonable question to ask a writer. Writers are meant to suffer. They put up with a lot for their art. The world hurts them into writing. Unfortunately I did not have time to work the answer out and simply replied, No, not at all. This was the wrong response and will undoubtedly have confused the young man in question. What is the point, after all, in having writers who don’t suffer doubts and torments? What sort of prose can one expect if contented people start writing books? Where will be all the angst, all the dysfuntion that is so necessary in the contemporary novel? No, the answer to that question really is:

Self: Of course. Of course I suffer.

(We now need to move on to what is really troubling the client.)

Therapist: Suffering is inevitable, normal even –what makes your suffering so different?

(This is a difficult question. A writer must at all costs avoid being seen as elitist. That is as much as sin these days as using big words. Accessibility is all.)

Self:  I’m writing about … about other places.

Self: Places where I don’t live. Places that belong to other people.

(This will be followed by a short period of silence while the full significance of this dawns on the therapist. Then we move on – but not in the sense in which we should all move on form our problems; this moving on is from topic to topic, which is not the same as moving on in the sense of getting away from old issues, of concerns.)

Therapist: Tell me about it.

(This is a very good phrase for a therapist, or indeed anybody at all, to use. It is a good breaker of ice at parties – immediately after you have shaken hands with a fellow guest, say “Please tell me about it”. That will produce a torrent of anguish, reproach, and recrimination. When that wave of feeling subsides, you should say, “How hard for you” or “What a terrible burden for you.” This may be followed with “How on earth do you put up with it – what a hero you must be.”)

Self: Well, you see, as a writer I have to set my books somewhere.

Therapist: Naturally. We all have to be rooted, don’t we – even fictional characters.

Self:   Particularly fictional characters. But, be that as it may, I find myself setting a lot of my material in Australia.

Therapist: But you don’t live there.

Self: No. And never have.

Therapist: You’d like to live in Australia, you see, but you don’t. You’re deprived. So a way of achieving that is to set things there.

Self:  I see. Australia Deprivation Syndrome?

Therapist: Possibly, we must be careful, though, not to invent too many new syndromes. That in itself may be a syndrome. Syndrome Syndrome. But, going back to your feelings, there may be conscious motivation too in your choosing to set things in Australia.

Therapist: Interest in its history. An attachment to the landscape.

Self: I love the noise the wind makes in eucalyptus trees. It’s a sort of swishing – like waves on he beach.

Therapist:  And then there’s the light. That lovely, limpid light – Aegean in its qualities.

Self: And the sound of birdsong. That wonderful cacophony of galahs. That gurgle of kookaburras. The very sky fills with those sounds.

Self: And the people too. Their default position seems to be cheerful.

Therapist: Oh nothing … a literary reference. I thought that as a writer … well, no matter. Give me an example.

Self: Well. Last time I was in Sydney, I dropped into a pub near where I was staying – a rather nice-looking place that called itself the oldest pub in the country or something like that.

Therapist:  There are so many oldest pubs in the country. Why, do you think, age confers respectability in a business? Anyway, this is your story, not mine …

Therapist: And that was significant?

Self: Yes, immensely. It’s one of the acid tests. W.H. Auden said that you could tell the state of a culture by its attitude to its trees. I think one might add to that: by the attitude of its taxi drivers and its bartenders. Go into a Scottish bar and what do you get? A scowl. We have a tendency to be miserable, you see – miserable and disapproving. Or an American bar – you don’t get a smile there.

Therapist:  I thought they went in for smiles.

Self: You have to be careful to distinguish between smiles that are the result of plastic surgery or expensive dentistry, and smiles that are … well, smiles. In an American bar, though, you get a look of professional sympathy.

Therapist: So you like Australia for its cheerful bartenders?

Self: Well, it goes deeper than that. That’s symptomatic of something – an attitude of fellow feeling – of helpfulness.

Therapist:  Mateship? I’ve read about the notion of mateship. Apparently it helped the survival chances of Australian prisoners of war in the Far East. The officers looked out for the men in a way in which didn’t always happen in more stratified outfits. Mateship.

Self: Yes. They don’t go in for attitude. They just get on with it. They make the most of things. They’re positive.

Therapist: Has it occurred to you that you’re in love?

Therapist: With a place.

(Silence. Suddenly the air is filled with the sound of birdsong. And then the wind gets up and there is the sound of its passage through the leaves of the eucalyptus trees.)

Therapist: Even if you don’t suffer, your heart may be broken by the beauty and feel of a place. Let yourself go. Acknowledge it. Write about it without feeling that you shouldn’t.

Therapist: Yes, really. But tell me, as a matter of interest, how did you feel about your mother?

Self: Is that the time already?

This piece was first published in The Age in 2016.

A Story for October- Belgian Shoes
A Story for December: Bertie’s Christmas