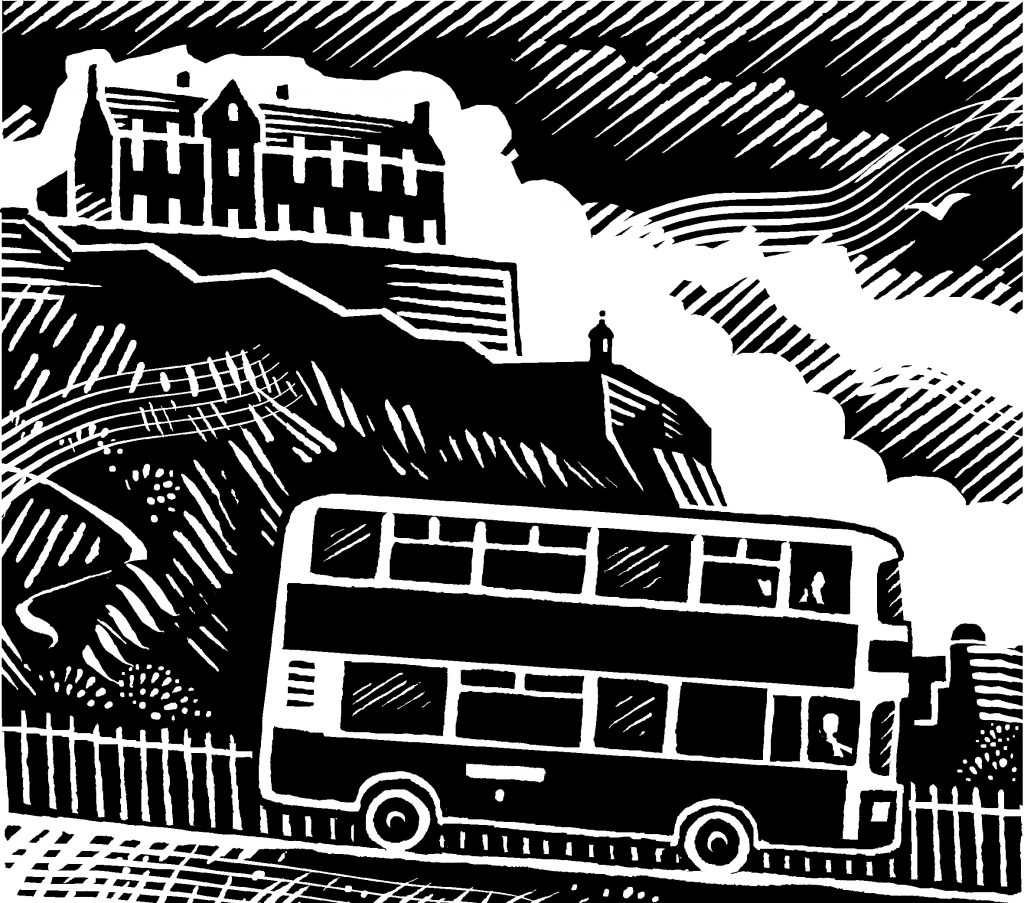 There are no trams in Scotland Street, nor buses for that matter. The street’s dimensions are generous, though, and would allow for a tramline, were anyone to wish to construct one. They would allow for a bicycle lane, too, and still leave room for cars and for the pedestrians who like to stroll down this most charming Edinburgh street.

Bertie Pollock (7, just) was the son of Irene Pollock (37, for the last two years) and Stuart Pollock (41). He was also the brother of Ulysses Pollock (1). His mother was an advanced thinker, the guiding spirit of at least three book clubs (including a Melanie Klein reading Group), and a graduate of the University of Edinburgh in social theory and politics. Her husband, Stuart, was a statistician with the Scottish Government. He worked flexi-hours in an open-plan office in Leith to provide figures relating to economic matters and public health issues. Although he was a good statistician, occasionally pressure of work led him to cut corners – as when he had presented numbers from the Scotsman Sudoku puzzle as Scottish oil production figures, or when, in response to a late Friday afternoon request from a government minister, he had plucked out of the air the statistic that people living in Edinburgh had a 43 per cent higher chance of catching heavy colds than those living in Glasgow.

“Where on earth did you get that information?” asked an admiring colleague. “And so quickly too!”

“Observation,” muttered Stuart. “This is a very sniffy city – haven’t you noticed it?”

The colleague had been shocked by this comment (Edinburgh sniffy? surely not), and had since then treated Stuart’s statistics with grave suspicion. As well he might; only a few weeks after the Sudoku-based oil figures, Stuart informed an anxious MSP that there was now incontrovertible evidence to support the theory that whereas global warming was making the rest of the country warmer, Aberdeen was actually becoming colder. To this he added the prediction that by 2034 temperatures in Aberdeen would not rise above 5 degrees centigrade for 32 per cent of the year. “Something to do with conditions in the North Sea,” explained Stuart vaguely.

Stuart was the father of Ulysses, or perhaps not. Bertie had noticed that Ulysses bore an extraordinarily close resemblance to the psychotherapist whom his mother used to take him to see in Queen Street. Dr Hugo Fairbairn had accepted a chair in Aberdeen and no longer saw Bertie, handing him over to his successor, a young Australian therapist, but Bertie clearly remembered the unusual shape of Dr Fairbairn’s ears, and of his brow too, and could not help but notice that Ulysses had both these features. His pointing this out to his mother, though, had provoked only a pained silence, followed by a discouraging glare. When he made the same remark to his father, the parental reaction, he noticed, was different, but again was not conducive to discussion.

Bertie was proud of Scotland Street, which he had seen referred to in a guide to Edinburgh as “one of the most agreeable of the New Town streets, with its sudden descent, its broad sweep, and its dignified, yet modest, Georgian facades.”

“If Scotland Street is such a nice street, Mummy,” Bertie observed to his mother, “then why haven’t they dug it up yet?”

He made this remark to his mother while he was with her in Valvona & Crolla, the delicatessen from which Irene purchased the family’s supplies of sun-dried tomatoes, porcini mushrooms, and other staples of the Edinburgh New Town kitchen.

Irene laughed. “Oh very drole, carissimo! But a very good point, too.” She picked up a packet of pasta and examined it critically. “I suppose our city parents …” Irene, of course, objected strongly to the use of the term city fathers and had been responsible – single-handedly, she claimed – for the introduction of a more acceptable alternative. “… I suppose our city parents do have a penchant for digging things up. Perhaps I should ask your new psychotherapist, Bertie. He has real insights into repetitive behaviour.”

“That’s quite possible, Bertie,” said Irene, replacing the pasta and reaching for a jar of olives. “Many of our acts, you know, are not what they appear to be on the surface. They reveal something within us, Bertie – deep within.”

“Or it could be archaeology, Mummy,” said Bertie. “Do you think that it’s archaeologists who keep digging up the town?”

Irene smiled. “I don’t think so, Bertissimo. No, I don’t think it’s archaeologists at all. It’s actually the tram system they’ve been building.”

“It’s been going on for a long time,” said Bertie. “How long does it take to put in trams, Mummy?”

Bertie looked thoughtful. “Tofu says that they’ve dug some of it up already. He told me that they finished some sections and then immediately dug them up again. Do you think they put the rails in the wrong place?”

“Heaven knows,” said Irene. “Now, do you see any truffle-scented olive oil, Bertie? Tartufo is the Italian word for truffle, carissimo. Tartufo – can you say that, Bertie?” She thought for a moment. “That would be such a nice name for a little boy, Bertie, don’t you think? If Mummy had another baby brother for you, Bertie, would you like him to be called Tartufo?”

Bertie muttered the Italian word reluctantly. He did not think it would be a good idea for his mother to have another baby, as she had difficulties enough with Ulysses, who was inevitably sick whenever he saw his mother or when she tried to pick him up. Tartufo could be the same, and how would they cope with two vomiting babies?

“I don’t see how they could put tram lines in the wrong place,” persisted Bertie. “There are street maps of Edinburgh, aren’t there, Mummy? Couldn’t they have looked at those?”

Irene was distracted by the large array of olive oils, and answered absently. “Possibly … possibly. Mind you, Edinburgh can be a confusing city.”

“Tofu says that they put the tram lines all the way down Leith Walk and then took them up again. I think he’s fibbing, Mummy. Nobody would do something like that, would they?”

“I can’t imagine it, Bertie,” replied Irene. “And you’re right, Tofu is a bit unreliable.”

Irene frowned. “I don’t think you’ll be able to get a tram over to the Steiner School. No, I don’t think so. It’ll still be the 23 bus for you, Bertie.”

Bertie looked disappointed. “But surely the tram will go to that side of the city, Mummy. Half the people live over there, after all.”

“That’s true,” said Irene. “But there we are, Bertie. We can’t have everything  in this life. We can’t have trams going places just because that’s where people want to go. That’s not the way it works.”

“So where do they go?” asked Bertie. “Do they only go where they want us to go?”

“It looks a bit like that,” said Irene. “They decided where we should go, and that’s where they made the tram lines.”

“Where do they want us to go, Mummy?”

Irene paused, and reached for a tin of anchovies. “They want us to go from York Place to the airport,” she said.

“Yes,” said Irene. “They want us to go out that way. The Gyle, places like that. Then the airport.”

“And back too?” asked Bertie.

His mother nodded. “I can’t imagine that many people will wish to get off at the airport. The airport charges people to get off there, you know, Bertie. You have to pay a pound or something like that if you want to drop somebody off in your car. It’ll probably be the same with the trams. The airport people will stand there and say to the poor tram-driver, Pay us twenty pounds, right now, for dropping all these people off. Pay up!”

Bertie wrinkled his nose. “That’s really rude, Mummy. What do visitors to Scotland think? What do they think of having to pay to drop people off? I bet you don’t have to do that in other places.”

Bertie continued with his questions. “Will you have to pay a drop-off charge if you just stay on the tram?”

“I should think so,” said Irene. “It’s like paying 50 pounds to get out of jail in Monopoly. Once you cross into their territory, you have to pay. But be that as it may, people will just stay on the tram and go back to York Place. I expect there’ll be a lot of people who’ll do that when they discover that the tram doesn’t go anywhere where they want to go.”

“It’ll be called a round trip, I think,” said Bertie.

He looked up at the higher shelves, at the delicacies beyond him now but that he would be able to reach when he was eighteen – or if he came to Valvona & Crolla with Tofu. They could take it in turns to stand on each other’s shoulders and reach for those attractive, high items, although Tofu, being greedy, would want to eat more than his fair share of whatever they found.

Bertie had an idea. “Do you think they could put different wheels on the trams, Mummy? Then they could just drive them on the roads and go where people really needed to go.”

Irene considered her answer. Bertie often came up with ideas that seemed odd at first blush but proved to be remarkably insightful for a seven-year-old. “They could do that, Bertie,” she mused. “They could do … But then a tram would end up being a sort of bus.”

“And we’ve already got buses, haven’t we?”

Bertie pressed on. “And they’re jolly good, aren’t they, Mummy? The 23 bus always goes where it says it’ll go, and it has hundreds of stops.”

“So we should just put tyres on the trams and then they could go everywhere?”

Irene smiled. “I suppose so, Bertie.”

“And there wouldn’t have to be any more digging up?”

“No, there would not.” Irene paused. “Until the next time, that is.”

Irene had completed her shopping and they went to the till, where the purchases were rung up. Then they went outside and began to walk up towards York Place and Queen Street. Bertie was due for his psychotherapy appointment in twenty minutes, and so they did not linger. In York Place Bertie suddenly stopped. “There,” he whispered. “There! Look!”

Irene looked in the direction in which her son was pointing. “What did you see, Bertie?”

Bertie’s voice was high with excitement. “I think I saw a tram. I’m sure I did. It was white and it moved … like a tram moves. Just like that.”

“It could well have been a tram, Bertie.”

“Going to the airport?”

Irene nodded. “And did you see anybody in it, Bertie?”

Bertie shook his head. “It was empty, I think.”

They continued their walk. Then Bertie said something unexpected. “Do you think that you should cry if you make a mistake, Mummy?”

Irene looked down at her son. “That’s a very strange question to ask,” she said.

“I was just wondering,” said Bertie. “That’s all.”

Irene gave no answer; she was still thinking. So Bertie answered his own question himself. “I think it’s best not to, you know. I think it’s best just to smile and say, Oh well. Then you get on with what you were doing.”

“And if you disagree with other people over something,” Bertie continued. “Something like trams or other big questions …” He faltered.

“We shouldn’t do that, Bertie. We really shouldn’t.”

“Not in Scotland,” said Bertie.

They continued with their journey. High above Edinburgh, a jet described an arc of white vapour across the empty blue vault of the sky; while beneath it a young boy looked up and stared, and held his breath for a moment, just a moment, in complete wonderment at what the sky, and life, could hold.

A Story for May: Small birds, like painted chickens
A Story for July: Three Friends By Themselves