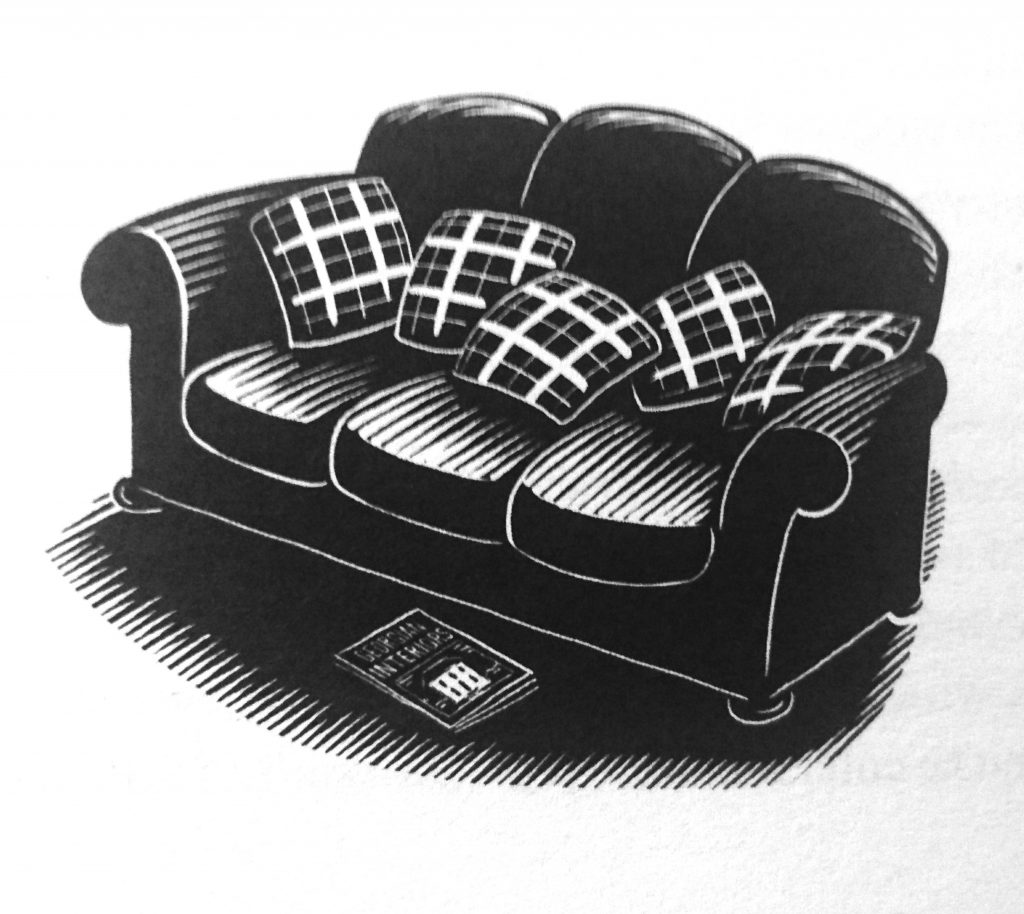 “You’re going back to work?”

The question came from Jean’s friend, and it was asked with surprise.

The friend was quick to reassure her. “No reason at all. It’s just that it’s been some time, hasn’t it?”

Jean made a quick calculation. “Twenty-two years,” she said. “More or less.”

It did not seem like that, of course, but it was. She had stopped working four months before her first daughter had been born, and then a few years later her son had arrived. Now, with the boy just off to university, she was by herself again and in a position to resume work.

She was lucky: she did not have to work; her husband, Tim, had always been cautious and had taken out several life insurance policies a few months before the accident that had claimed his life. That was ten years ago, and since then she had been on her own, busy with the children and with the activities with which they filled their lives. She had been lonely at first – she missed Tim terribly – but as the years went by the pain had dulled. She had taken up bridge, and music. She had volunteered at a local charity shop. She had spent a lot of time organizing summer trips for the three of them – she arranged house exchanges in France and Germany, they went to Greece; they took a cottage in Donegal. She had been determined to give the children the best possible chance in life, and they had made the most of it.

Jean smiled. “Yes, nervous. You know how it is when you get a bit older? New things can be a bit of a challenge.”

The friend knew exactly how old she was; they had been at school together and a bare few months separated them in age. “Forty-five’s nothing these days, you know.”

Jean agreed. “Yes, you’re right. But imagine having to do something like a driving test, or a music exam, at this stage in life. I’m not sure if I could.”

“Lots of people do things like that later in life. Somebody went up Everest the other day at … what was it? Seventy?”

The friend nodded. “I think so. With a bit of help, of course.”

The friend asked what she was planning to do. She had worked in a travel agency, hadn’t she? Would she go back to that?

Jean shook her head. “I’m not sure that travel agents have as much work to do as they used to,” she said. “People make their own bookings online. They don’t seem to need advice any longer.”

“I have some secretarial skills,” said Jean. “I know how to file and type. I could do general office work.”

The friend agreed that there was always a call for that. ‘You’ll be snapped up,” she said. “You don’t need to feel nervous.”

But Jean was not so sure. She had read somewhere that going back into the work force was not always easy. Her work record was ancient and she had nobody to ask for a reference, and in the background there was always the question of ageism. Young people did not like to admit it, but they discriminated against anybody over forty if they had half the chance. What if she were to be interview by somebody of twenty-five? What if the other candidates were in their twenties? She imagined the wording of the tactful refusals: not enough recent experience; not familiar enough with computers; not up to date with current priorities – there were so many ways of saying no.

Her friend detected her hesitation, and now she sought to boost her confidence. “Be yourself,” she said. “And don’t worry. You’ve got a lot to offer.”

She bought the local paper. Each week, alongside the news of planning applications and local primary school swimming galas, there was a page devoted to jobs. These were organized roughly into categories: building trades, driving and delivery, home care, and so on. At the bottom of the page was a general category labelled similarly Other. She looked more closely. Other was presumably for people who had no particular qualifications or experience. And that, she decided bleakly, was her.

The injustice of this struck her. She had nothing to be ashamed of: she had run a home for ten years with nobody to help her. She had managed the family finances. She had seen two children through the trials and tribulations of adolescence. She had tried to contribute as much as possible to the local community and had successfully led the opposition to the building of a greed-driven new development that would have gobbled up a very popular local park. And here she was relegated to other … It was most unfair.

She looked at the vacancies under other. There was one for the position of project manager, although nothing was said about the nature of the project; there was one for a logistics manager in an undisclosed industry; there was even one for an apprentice tattoo artist. Could she apply for that? She did not like tattoos, but she would be applying them rather than having one herself. No, the very thought of applying needle and ink to the skin of others made her feel queasy, and forty-five, by any standards, was a bit late to launch oneself in the world of tattoo parlours.

She reached the final advertisement. An agency was looking for a temporary receptionist. No particular skills were required other than – and this caught her attention – a sympathetic disposition. Well, she had that, she thought. She felt sympathy for people – she always had. But then she wondered what the business actually did: agency was a broad term and could cover anything. Presumably it was legal: the local paper would not have countenanced it otherwise.

She noted down the telephone number. She would call later that day and find out just what they were looking for.

She dressed carefully for the interview. They had been helpful on the phone but had not said anything about the nature of their business. They had given her an office address, though, and said they hoped that she would find the job attractive. She was slightly surprised by that: it suggested that they had not had many other applicants and were particularly keen to take her. Was that something to do with the nature of the business, or was it a shortage of sympathetic people?

The sign on the door revealed everything. The Rose Milburn Introductions Bureau. So that settled that: they were a marriage bureau.

She went inside, to find herself in an attractive waiting room. There was a receptionist’s desk with a telephone, a low table on which a selection of magazines was displayed, and another table, under the window, dominated by a vase of white carnations. The opening of the front door had triggered a bell and this now brought a middle-aged woman from an office off the waiting room.

The woman, having introduced herself as Rose Milburn, invited her to take a seat. Then she launched straight into the interview. She did not seem to bother about Jean’s lack of recent experience, but expressed admiration for her having raised two children by herself. She approved of the volunteering. No, she did not think that shorthand was necessary. Yes, she felt that Jean probably had just the right attitude to deal with their clients, who were often over fifty and a bit anxious about going to a marriage bureau. “And of course they’re very wary of the internet,” Rose Milburn went on. “Our clients are more discerning that that,” she explained. “They want a personal service. They want to be able to speak to a human being about their requirements.”

There was a silence, and then Rose said, “When can you start?”

“Of course. You’re ideal.” Rose paused. “You couldn’t possibly start tomorrow?” she asked. “I have to go and visit a sick relative and I really would appreciate somebody standing in for me – just to keep the office open.”

“There’s no reason why I can’t start tomorrow,” said Jean She had decided that she liked Rose Milburn and was going to enjoy working there.

“Well, tomorrow it is,” said Rose. “I’ll come in early and give you an hour or so of training. Then it’ll be up to you.”

The following morning, Rose explained to Jean about the forms they used and the way in which they recorded the client’s interests and preferences.

“We have somebody coming in at ten,” she said, consulting her diary. “And then there’s another new client at midday. Both of these will have to be talked through the form. You can do that, can’t you?”

Jean swallowed; she was not at all sure that she would remember everything she needed to know about the form, but she did not want to disappoint Rose, who had been at pains to explain it all to her.

Rose left at nine-thirty. “I’ll be back later this afternoon, she said. “So until then it’s over to you.”

She turned to go, but then she thought of something. “Are you single?” she asked. “I forgot to find out.”

“And nothing … I mean, nothing …” Rose made a vague movement with her left hand.

Jean shook her head. “I’m happy enough with my own company.”

“Fair enough,” said Rose. “But you should never close the window when you’re in a room by yourself.”

Jean puzzled over the meaning of this, but decided that it was probably meaningless. “I don’t intend to close any windows,” she said, trying to sound as firm as she could.

A man came in precisely at ten o’clock. A glance at the diary revealed that this was Edward Curren, and this was his initial interview. Go through all of these with him, Rose had scribbled in pencil. He sounds like a real catch!

Jean introduced herself and invited Edward to sit in the chair on the other side of her desk.

“Just a few simple questions,” she said. “So let’s start with how you’d describe yourself. Would you call yourself more sporting than intellectual?”

She looked art Edward Curran as she wrestled with question. “Are they mutually exclusive?” he asked.

Jean thought about it for a moment. He was right, she thought; there was no such rigid divide between the two, and so she nodded for him to proceed. “I agree with you,” she said. “You can be both.”

She went on to the next question. “Do you like music?”

Edward nodded. “A lot,” he replied.

Edward answered without hesitation. ‘Classical, mostly. And I love opera.”

“And watching sport?” asked Jane, moving to the next column on the form.

Jean smiled. “I love tennis too,” she said. “Although I’m not very good.”

Edward seemed relieved. “The same goes for me” he said. ‘I can’t stand people who boast about their sporting prowess.”

“Exactly my thoughts,” said Jean noting down his response on the appropriate part of the form.

Then Edward seemed to think of something. ‘Do you like the countryside?” he asked.

“I agree,” said Jean. “In fact, I was thinking of going for one of those walks in France where they take your luggage from inn to inn while you walk.”

“That’s amazing,” said Edward. “I was just about to book myself on one of those in a couple of weeks.” He hesitated, and she could see that he was wrestling with shyness. She liked shy men, particularly when they were as attractive as Edward was. “You wouldn’t be interested in coming along, would you?”

She did not hesitate. “I’d love that,” she replied.

He seemed pleased, but then he frowned. “But what about work? What about this job?”

A Poem for January: Holy River
A Story for March: Meeting Frank