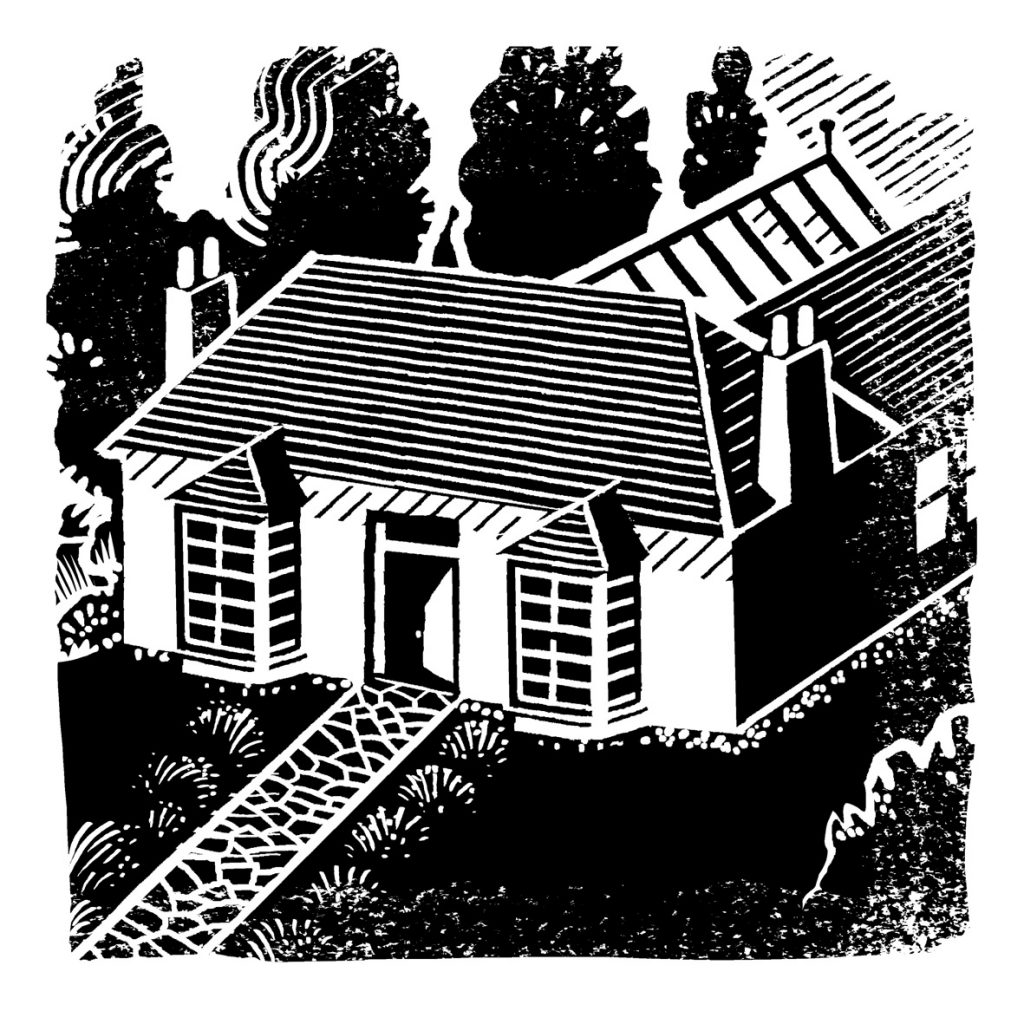 One clear winter morning Marigold Fox asked Edward Fox if he could sneak out and see if there were any scraps to be had from the back of the inn. This inn was not far from the Fox family’s home, a burrow at the side of a field of turnips. The inn was well-known for miles around for its pies. People would drive out there in their cars, park in the car park, and go inside for a lunch of pie and potatoes. These pies, that were made by Mrs Porter, the inn keeper, and she knew how to make tastier pies than anybody else in that part of the country. In fact, there was a poem that parents would recite to their children, all about these pies.

A great success of what she bakes,

Her bread, you know, cannot be beaten

When buttered thick and then eaten,

But for sheer pleasure, oh my, oh my,

What might one say about Mrs Porter? That she was a large woman with thick, strong arms? Yes, she was that all right. That she had a husband called Mr Porter, who knew how to fix cars when they wouldn’t go? Yes, that was quite true. That she had a nice smile and a loud laugh? Yes, you would certainly say that of Mrs Porter. But there was something else about her – she liked foxes.

She had always liked foxes. When she was a little girl, she had had a picture of a fox, made for her by her grandmother. It was not painted, as most pictures are, but was embroidered in careful stiches on a piece of linen. The fox in that picture was wearing a red waistcoat and had a very fine set of whiskers. She loved that picture, and whenever she felt sad, or frightened, as we all may feel from time to time, she would sit and look at it. That always made her feel a bit better.

Because she liked foxes, Mrs Porter had thought of a good use for the inn’s left-overs. Not everybody can eat a whole pie, and so there were often tasty scraps to be salvaged from the inn kitchens. Rather than throw these away, Mrs Porter scraped them onto a large tin plate she kept by the kitchen door. Then, once the plate was full, she would take it outside and leave it by the gate to the kitchen garden at the back of the inn. Sometimes Mrs Porter would call out to any fox who might be within earshot – just to let them know that the plate was waiting for them.

Fancy something from the table?

Come along, if you are able.

Mutton pie is on the plate,

Sitting waiting near the gate,

Eat it there, or if you wish

Carry off this toothsome dish;

Your little cubs will all adore

This mutton pie and ask for more!

That morning, Marigold said to her husband, “Edward, pop round to the inn, will you, and see if there’s a spot of pie. The children had no breakfast this morning – and no dinner last night either – and there’s nothing in the larder.”

“All right, my love,” said Edward Fox. “I’ll trot along and see whether Mrs Porter has left any treats out for us, bless her.”

He went outside, taking care to sniff at the air for any sign of danger. Life is hard for foxes – they have their enemies, and they have to be very cautious when they are outside their burrows. They have to beware of dogs, who are old enemies of the fox – going back a very long way indeed. They also have to watch out for cars, that sweep along the narrow country lanes without bothering to check to see if there was any fox trying to cross the road. And most of all, they have to watch out for the hunt, which is the worst thing that can happen to any fox.

The coast was clear as Edward Fox set off for the inn. He made his way along the side of the hedgerows, picking his way past roots and clusters of weeds. When he had the chance, he padded along the bottom of ditches – a favourite route for any sensible fox. There was a spring in his step, as he could feel the warm rays of the sun on his fur. That is what a fox likes most of all – the feeling of the sun shining on his back.

It took him no more than ten minutes to reach the inn. Now he had to be a bit more careful, as there were people about and a careful fox keeps well clear of people. Trotting through Mrs Porter’s vegetable garden, past rows of cabbages and onions and other vegetables he could not name, Edward found his way to the back gate, where, with any luck, the tin plate would be waiting with its gifts from Mrs Porter.

The tin plate was there, sure enough, but it was completely empty. Not only was there nothing on it, but it had been licked clean – and only a few minutes earlier, it seemed.

Edward looked about him. Whoever had helped himself must be somewhere close at hand, and he would have to be on his guard. What if it had been a dog who had come across the scraps and wolfed them down? He could still be lurking about somewhere, ready to chase any fox who was unwise enough to come out into the open.

Suddenly, he heard a voice, and it was in Fox, the language that all foxes speak.

“Well, hello there,” said the voice. “And who might you be?”

Edward looked about him. It was a moment or two before he saw where the voice had coming from. In the hedge beside the gate, he could make out another fox, seated on a cluster of roots, legs crossed, obviously having recently enjoyed a good meal of mutton pie scraps.

The stranger got off his branch and came out to greet Edward.

“Sorry to give you a fright,” he said. “I could see you, but I realise you couldn’t see me.”

Edward Fox sized up the newcomer. He seemed friendly enough, but his instinct was still to be careful. This fox was well-dressed, with a well-cut blue jacket and a smart pair of red shoes on his rear feet. His whiskers had been kept in good order too, and were combed back against his face in a style that was quite the fashion at the time. But you never knew with strangers, especially ones that you came across in hedges.

“It wasn’t expecting anybody,” said Edward. “I had come to look for …”

The stranger did not let him finish. “A spot of pie? Oh, I am sorry about that. I polished it off, I’m afraid. I didn’t know it belonged to you.”

“Well, it doesn’t really belong to me,” said Edward. “I suppose it’s there for anybody who needs it.”

“Well that’s all right then,” said the stranger. “And please, allow me to introduce myself. I’m Larry Fox.”

They shook hands, and Edward gave Larry his name. Then Larry dipped into the pocket of his jacket and produced a card. “This is me,” he said, handing it to Edward.

Edward read what was printed on the card. LARRY FOX, CHIEF EXECUTIVE, FOX AND CO.

Larry looked over his shoulder. “FOX AND CO is my firm,” he said. “I’m in business, you see.”

Edward waited for him to say more.

“You may be wondering what my business is,” Larr continued. “I have sort things out for people. If they have any problems, I work out how to deal with them. I suppose you could call me a fixer.”

Edward did not really know any businessmen, and so he was not sure what to say to Larry. At last he said, “Are you busy?”

The question seemed to make Larry feel sad. “I was,” he said. “I had an office down by the river, but then they came and built a bridge over the tunnel in the river bank where my office used to be. So that was the end of that. Now, I suppose I’m looking for work – and there doesn’t seem to be much of that about.”

Edward said he was sorry to hear that. Perhaps some work would turn up in the future – you could never tell.

“And I don’t have anywhere to live at the moment,” Larry went on. “Come night time, and I’ll have to sleep in the hedge over there – no matter how cold it gets.” He shivered, even though the sun was shining brightly and the air was warm.

Edward hesitated. He had his warm burrow. He and Marigold had their comfortable bed with its red bedspread and its soft blankets. The girls each had their little beds and a wardrobe for their clothes. They were very fortunate. And one thing that Edward’s parents had taught him was that if you are lucky in this life, then you should never forget people who were not quite as lucky as you were.

When you have a lot of stuff

Think of those without enough,

When you’re having lots of fun

Think of those who’re having none;

You may have a tasty dinner

While other folk are getting thinner,

So don’t be selfish, just be fair:

Edward cleared his throat. “My place is not far away,” he said, pointing in the direction of the family burrow. “We don’t have much food in the house, but I’m sure we’ll find something.”

Larry Fox’s face broke into a wide grin. “Oh, my dear sir, you are so kind. And I am more than happy to accept your generous offer. Thank you – and thank you again!”

This is an excerpt from a new children’s book that Alexander is currently writing.

A Story for July: Elvis at Prestwick Airport