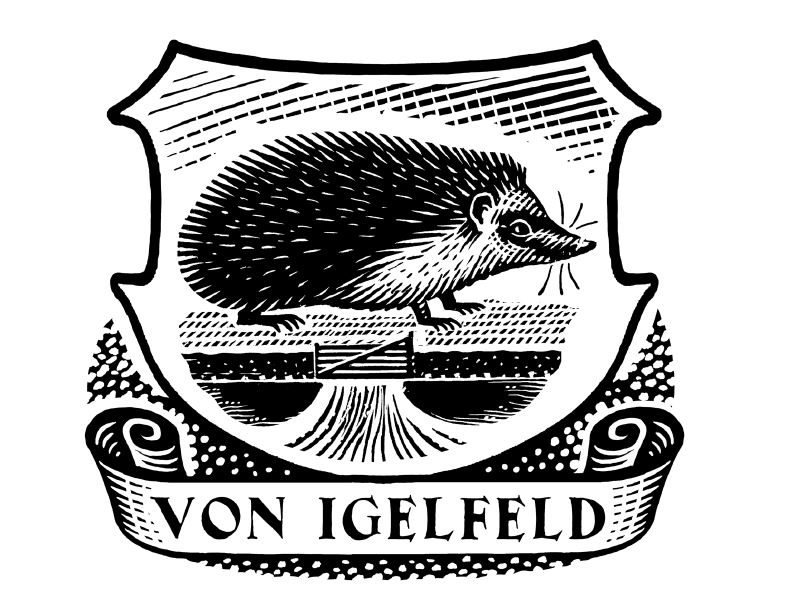 There were only three professors in the Institute of Romance Philology, although there were eleven untenured researchers, nine of them allocated to the three full professors, each of whom had three. The remaining two, both named Müller, were independent, having completed the necessary qualifications needed to take up a Chair if one were to become vacant. These two both eyed the Chairs occupied by von Igelfeld, Prinzel and Unterholzer with ill- concealed fascination, and secretly would have been delighted if illness or other disaster were to strike one, or preferably two, members of the professoriat. Occasionally this led to muttered remarks passing between the two of them, such as: ‘Did you think Professor von Igelfeld looked slightly pale this morning, Herr Müller? I do hope he’s not sickening for anything serious – or even fatal.’ And that might bring forth the response, ‘You’re right, Herr Müller. He would be sorely missed were he to succumb to some dreadful illness – which heaven forfend, of course.’ And then each would silently reflect on just what would happen were von Igelfeld’s Chair to be vacated. Prinzel and Unterholzer would both apply for it, they imagined, and this would mean that the resulting vacancy further down the academic food chain would become available to one of them. Each Müller, of course, thought of himself as being markedly superior to the other, but both knew that the resulting competition would not be a pretty one. ‘They’d sell their own grandmother for a Chair’, is a common criticism of those on the lower rungs of the academic ladder, which raises questions as to just why so few German professors appear to have extant grandmothers. That is a complex issue, though, and one for another time.

The other senior member of the Institute’s staff was the Librarian, Herr Huber. Although not a professor, Herr Huber was allowed to use the Senior Coffee Room along with von Igelfeld, Prinzel and Unterholzer; the Müllers were not afforded the same privilege, but were permitted to keep the milk for their coffee in the Senior Coffee Room fridge, as long as they did not attempt to make their coffee there. For that purpose they had a small kitchen at the end of a corridor, although this did not have anywhere to sit.

Herr Huber was in his early forties and was a graduate of the University of Munich. He also had a diploma in Advanced Cataloguing from the Library School of the University of Hamburg, and a further diploma in Linguistic Librarianship from the University of Amsterdam. Until recently he had been a bachelor, but was now married to a woman from Bonn. They lived just outside town in a very small house on the edge of a forest – ‘Rather like Hansel and Gretel,’ observed von Igelfeld, much to the amusement of his colleagues.

Herr Huber was assisted in his duties as Librarian by three colleagues: the newly appointed Dr Hilda Schreiber- Ziegler, a large and rather brassy woman who was his deputy; Herr Markus Herring, a man in his early thirties who was a keen marathon- runner; and Dr Jorge Martensen, who was Danish on his father’s side and German on his mother’s. Dr Martensen had a doctorate in semiotics, the science of signs and symbols, and was the author of a pamphlet on the sign language of Cistercian monks, of which the Library now possessed seven copies.

When first she had been appointed, Dr Schreiber- Ziegler had assumed that as Deputy Librarian she would be entitled to use the Institute’s Senior Coffee Room. On her first day in the Institute she had followed Herr Huber into those precincts, only to be greeted with sudden and complete silence. Consumed with embarrassment, Herr Huber had rapidly engaged her in a long conversation about nursing homes, while his three colleagues buried their noses in the morning papers.

It was von Igelfeld who took it upon himself to take the Librarian aside and remind him the rules of access that had always been applied to the Senior Coffee Room.

‘There has never been any doubt,’ he said, ‘but that use of the Senior Coffee Room is reserved for the holders of full chairs, Herr Huber, and, as a special concession, full librarians. You are a full librarian, and of course nobody would dispute your right to take coffee with us. But Dr Schreiber-Ziegler is, as you of all people must know, a deputy librarian, which is clearly not the same thing as a full librarian.’

Herr Huber protested that he had not invited his deputy to accompany him. ‘She just got up and followed me into the Senior Coffee Room,’ he said. ‘As you know, Herr Professor, I am not a radical of any stripe. I would never challenge this sort of convention.’

‘I very much appreciate that, Herr Huber,’ said von Igelfeld, with the air of a judge obliged to uphold an onerous law. ‘It is certainly the case that you do not have a reputation for radicalism. And yet, you will appreciate why it is that we must hold you responsible for your deputy.’

Herr Huber looked miserable. ‘I shall not find it easy to talk to her about this,’ he said. ‘It will be very hard to tell her that she cannot join us for coffee – especially when she said to me how much she enjoyed this morning’s coffee break, even if nobody spoke to her.’

Von Igelfeld sympathised with Herr Huber’s embarrassment, and it was for this reason that he had prepared in advance a compromise that he now revealed to the discomfited Librarian.

‘In order to make it easier for you,’ said von Igelfeld, ‘I propose that we redefine the rules. Although Dr Schreiber-Ziegler will not be allowed to use the Coffee Room on normal mornings, I see no reason why she should not be allowed to use it on those occasions when you are, for any reason, absent from the Institute. We shall then deem her to be you – temporarily. This may not happen very frequently, but that is not the point. The point, you’ll agree, is the principle involved.’

Dr Schreiber- Ziegler listened carefully when Herr Huber conveyed this ruling to her. When he had finished, she stared at him with a look of astonishment that slowly became a broad grin. ‘Are you serious?’ she asked.

‘I’ve never heard such absurd nonsense in my life,’ Dr Schreiber- Ziegler blurted out. ‘Hedgehog- Field, Prinzel and what’s- his- name, the one who looks like a potato . . .’

‘Professor Dr Unterholzer,’ provided Herr Huber, and immediately blushed bright red. He would never describe a senior professor of the University as resembling a potato, and yet he had somehow been tricked into doing just that. This Dr Schreiber- Ziegler, he decided, was potentially a very dangerous woman indeed.

‘Yes, him – well, all three of them,’ continued Dr Schreiber- Ziegler. ‘Who on earth do they think they are?’

Herr Huber was at a loss. This was as seditious a conversation as he had ever been involved in, and it filled him with foreboding. If deputy librarians could speak with such contempt for full professors, what might they say, in private, about full librarians?

‘I think we should be very careful in what we say,’ he cautioned. ‘An ill- judged word could cause immense damage if it were to get back to those for whose ears it was not intended.’

Dr Schreiber- Ziegler gave him a challenging stare. ‘Phooey,’ she said after a while. ‘That’s what I think of them and their ridiculous rules. Phooey.’ She paused. ‘And you can tell them, Herr Huber. Tell them I say phooey.’

Herr Huber’s shock now knew no limits. ‘I certainly shall not,’ he said.

He returned to his desk, uncertain how to proceed. He had been at the Institute for eighteen years now, and not once in that time had he encountered any expression of overt disrespect towards the authority of senior scholars. This, he thought, must have been what it was like to live in revolutionary France, just at the moment that the first whispered threats to Louis XVI were being heard in the streets – and look what had happened there: between the first stirrings of discontent and a full- blown uprising was but a short step. For a few moments he imagined Dr Schreiber-Ziegler as a tricoteuse, sitting beneath the guillotine, her knitting needles clicking busily as the tumbril delivered von Igelfeld, Prinzel and Unterholzer to their appointment with revolutionary justice. But wait – there was a fourth figure in the tumbril – and, in a moment of horror, Herr Huber saw that it was himself.

This is an extract from Your Inner Hedgehog, the long-awaited return to the Von Igelfled series, which will be published later this month in the UK (US publication in April).

A Story for February- Doctors, detectives, common sense
A Story for April- Under the Acacia