Botswana celebrates 50 Years of Independence today, 30 September 2016, and Alexander McCall Smith has been talking on the BBC about the success of the country and his love for the people of Botswana.

He wrote a short conversation between Precious and Grace to mark the anniversary of independence and read it on BBC World Service News and BBC Focus on Africa. Watch the clip from the news now to hear this reading.

The conversation is reproduced here with kind permission from Alexander for your enjoyment:

Mma Ramotswe, founder of the No 1 Ladies Detective Agency, Botswana’s only detective agency for the problems of ladies—and others—was sitting in her office with her assistant, Grace Makutsi, associate detective and distinguished graduate—with 97 per cent—of the Botswana Secretarial College. It was not a busy day and they had time to think—a good use for one’s time, said Mma Ramotswe.

“Thinking is never wasted,” she said to Mma Makutsi. “When you have nothing else to do, you can always think.”

She thought that morning of her country—the country she loved so much, the country of which she was so proud.

Mma Makutsi looked up from her desk. “Oh, I am very proud,” she said. But then she thought: of what? And asked Mma Ramotswe what she was proud of.

“Of Botswana,” said Mma Ramotswe. “I am proud of what this country has done over the last fifty years, Mma. If you look around, there is so much. There are roads and schools and hospitals …”

“And the No 1 Ladies Detective Agency,” interjected Mma Makutsi.

“Yes, that too,” agreed Mma Ramotswe.

She took another sip of her tea. And she thought of her father, that good man, Obed Ramotswe, who had loved this country too, and who had nursed such hopes for its future. What would he think if he were able to come back, just for one day, and be shown what people had done. What would he say to her?

She thought about this. If he were to return—which of course he could not do, as late people cannot come back—but if he were, she would take him and show him, and hold his hand while he looked around at this good country, at this good place. And then he would say to her, perhaps, “It has worked out well, hasn’t it, Precious?” 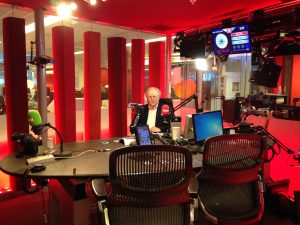 Alexander McCall Smith records his BBC tribute to Botswana on the anniversary of their independence.