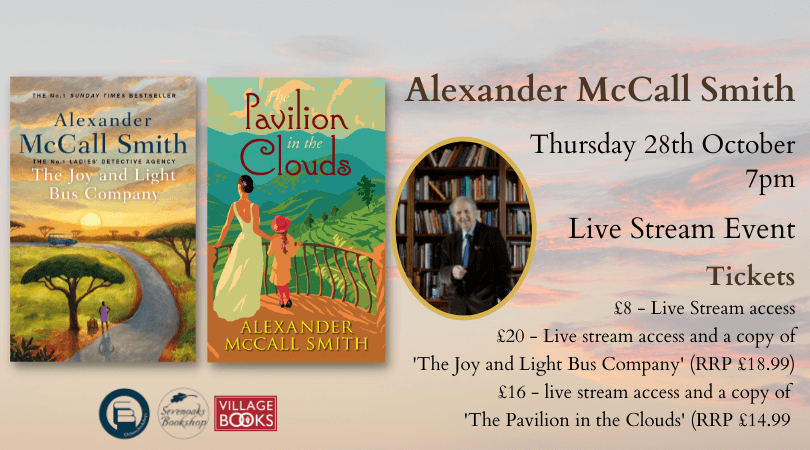 Join us for an evening in with the fantastic Alexandar McCall Smith, who be discussing the latest instalment in THE NO. 1 LADIES’ DETECTIVE AGENCY and his new  stand alone novel.

The Joy and Light Bus Company

Mma Ramotswe knows she is very lucky indeed. She has a loving family, good friends and a thriving business doing what she enjoys most: helping people. But the latest mystery she is called upon to solve is distinctly trickier than it initially appears, and, of course, there’s plenty to handle in her personal life between Charlie and his new bride and Mma Makutsi and her talking shoes.

In the end, Mma Ramotswe’s patience and common-sense will win out, and, without a doubt, all will be the better for it.

The Pavilion in the Clouds

It is 1938 and the final days of the British Empire. In a bungalow high up in the green hills above the plains of Ceylon, under a vast blue sky, live the Ferguson family: Bella, a precocious eight-year-old; her father Henry – owner of Pitlochry, a tea plantation – and her mother Virginia. The story centres around the Pavilion in the Clouds, set in the idyllic grounds carved out of the wilderness. But all is not as serene as it seems. Bella is suspicious of her governess, Miss White’s intentions. Her suspicion sparks off her mother’s imagination and after an unfortunate series of events, a confrontation is had with Miss White and a gunshot rings off around the hills.