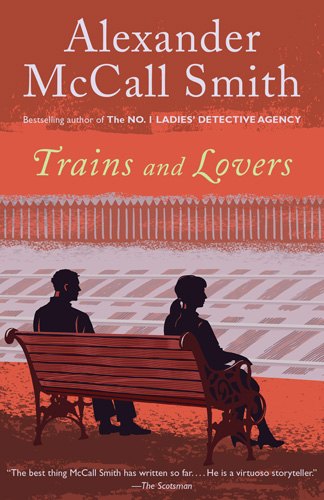 Please have your hearts ready for inspection.

Imagine you’re on a train. Think about all the other people on the train with you, what their lives are or have been; the different experiences you’ve all had. But there is one thing that you undoubtedly all share: you have all been in love at one time or another.

In this surprising and poignant story, four strangers meet on a journey from Edinburgh to London. Each has a tale to tell: for Hugh, a brief encounter on a railway platform leads to an impulsive and possibly dangerous decision; Kay recounts the long journey back to her childhood home in Australia and the love that was there; David remembers a teenage friendship that shaded into love; and Andrew makes a discovery that art and people may not be what they seem to be at first glance.

Love may come to us, then, in very different guises, and be unexpected too, but loving others, as one of the characters in this tale observes, is the good thing we do in our lives.

“The best thing McCall Smith has written so far … he is a virtuoso storyteller whose tales from the human heart remain very definitely on track”
The Scotsman
“Simple but affecting … Trains and Lovers shows McCall Smith is very aware of the melancholy affairs the heart can bring”
The Herald
“Love doesn’t always end happily, but even then it can end well, with hope, dignity, and humanity, and that’s just what Trains and Lovers celebrates”
Wichita Eagle
“A lovely, quiet vacation that requires no packing, missed connections or meeting actual strangers on a train”
Weekly Alibi (Albuquerque)

This is the story of four people, all strangers to one another, who met on that train, and of how love touched their lives, in very different ways. Love is nothing out of the ordinary, even if we think it is; even if we idealize it, celebrate it in poetry, sentimentalize it in coy valentines. Love happens to just about everyone;, it is like measles or the diseases of childhood;…
Read More

This is the story of four people, all strangers to one another, who met on that train, and of how love touched their lives, in very different ways. Love is nothing out of the ordinary, even if we think it is; even if we idealize it, celebrate it in poetry, sentimentalize it in coy valentines. Love happens to just about everyone;, it is like measles or the diseases of childhood; it is as predictable as the losing of milk teeth, or the breaking of a boy’s voice. It may visit us at any time, in our youth but also when we are much older and believe we are beyond its reach; but we are not. It has been described as a toothache, a madness, a divine intoxication—metaphors that reflect the disturbing effect it has on our lives. It may bring surprise, joy, despair, and, occasionally, perfect happiness.

But for each person who is made happy by love, there will be many for whom it turns out to be a cause of regret. That is because it can be so fleeting; one moment it may take our breath away, the next it may leave us bereft. When it does that, love can be like be a haunting, staying with us for year after year; we know that it is over, but somehow we persuade ourselves that it is still there. The heart has more than its fair share of ghosts, and these ghosts may be love, in any of its many forms. I knew one who fell deeply in love at nineteen—smitten, overwhelmed; astonished to find that all he wanted to think about was the other; unbelieving, at first, that this had happened to him. Thirty years later, he found the person he had loved, to whom timidity, if not shame itself, had prevented him from declaring his feelings, regularly coming to him in his dreams. So much had happened in those intervening years, but none of it had been shared, as life had taken them the two of them in very different directions. Nobody would choose to be in love like that, to hold on so strongly to something that was no longer there. Yet we admire such instances of tenacity, finding nobility in loss and in the way in which some people bear it.

If it were not for the train journey on that day, these four would never have met. Journeys may be like that, may bring together people who would otherwise never have known of each other’s existence. In that respect, long journeys have something in common with military service or boarding school, or even the shared experience of some natural disaster. Such things bring us into contact with people we would never have encountered but for the sharing of danger or unhappiness.

Journeys are not only about places, they are also about people, and it may be the people, rather than the places, that we remember. Those with whom one shares a carriage on the Trans-Siberian railway may well be remembered, even if the names of the places in which the train stops are soon lost. Of Kirov, Perm, Omsk and Ussuriysk—all of them stops on that long journey, most travellers, other than the locals, will probably only remember Omsk—for its sheer, prosaic finality, and for the fact that of all possible railway stations in the world, we are here in one called Omsk. I know nothing of Omsk, but it seems to me that its name is redolent of ending, a full stop; not a place for honeymoons or rhapsodies. Omsk.

Or Adelstrop. Yes, I remember Adelstrop, for the train stopped there in the heat—that is Edward Thomas. The poet was on a train journey into rural Oxfordshire, at a time when there was still an England of quiet villages and hedge-bound fields, and when a train might unexpectedly draw to a halt at a small place and there might be birdsong audible behind the hissing of steam. Nothing happens there, other than the stopping of a train and the escape of pent-up steam, but it brings home how suddenly and surprisingly we may be struck by the beauty of a particular place and moment.

Edward Thomas was not alone in sensing the poetic possibilities of the train. Auden’s Night Mail is entirely concerned with a rail journey: This is the Night Mail crossing the border/ Bringing the cheque and the postal order. You can hear the train in those lines; you can feel its rocking motion.

And then there is the poet, Kenneth Koch, who while travelling in Kenya came to a railroad crossing at which this sign was posted: One train may hide another. This was meant, of course, as a warning to drivers of the fact that the train you see may not the only train to reckon with, but it also meant, as Koch points out in his poem, that there are many things in this life that conceal other things. One letter may mean another is on the way; one hitch-hiker may deliberately hide another one by the side of the road; offer to carry one bag and you may find there is another one hidden behind it with the result that you must carry two. And so on through life. Do not count on things coming in ones.

Trains may hide one another, but they may also hide from us what they have in store—the meetings, the disclosures, the exchanged glances, the decisions we make or the insights that strike us on a journey. Trains are everyday, prosaic things, but they can be involved in, be the agents of, so much else, including that part of our human life that for so many far outweighs any other—our need for love—to give it and to receive it in that familiar battle that all of us fight with loneliness.