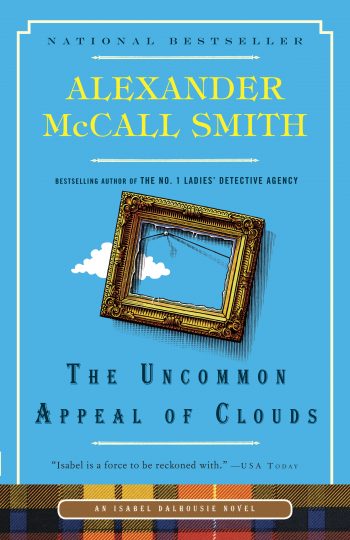 As a mother, wife, employer and editor, Isabel Dalhousie is aware that to be human is to be responsible. So when a neighbour brings her a new and potentially dangerous puzzle to solve, once again she feels she has no option but to shoulder the burden.

A masterpiece painting has been stolen from Duncan Munrowe, old-fashioned philanthropist, father to two discontented children, and a very wealthy man. As Isabel enters into negotiations with the shadowy figures in search of a ransom, a case where heroes and villains should be clearly defined turns murky.

“McCall Smith’s contemporary cozies have proved that crimes need not be punishable by death to provide a satisfying read … A genteel, wisdom-filled entertainment”
Los Angeles Times
“Habit-forming … Leaves plenty of time for pondering moral conundrums, the drinking of steaming cups of hot brew (coffee, in this case) and … gentle probing into the human condition”
The Oregonian

That conversation with Jamie about mathematical ability took place on one of Isabel’s working days. Jamie, who was a musician, kept irregular hours, and frequently had days when not only did he not have any rehearsal or performance commitments, but he also had no teaching. He taught bassoon at the Edinburgh Academy and had a number of private pupils too, but he managed to cram all his teaching into two…
Read More

That conversation with Jamie about mathematical ability took place on one of Isabel’s working days. Jamie, who was a musician, kept irregular hours, and frequently had days when not only did he not have any rehearsal or performance commitments, but he also had no teaching. He taught bassoon at the Edinburgh Academy and had a number of private pupils too, but he managed to cram all his teaching into two mornings and one afternoon a week, which left three weekdays for other things. Those days might easily have filled up with session work or preparation for concerts but times were hard and there seemed less and less of that work around. “Perhaps the music’s stopped,” he remarked to Isabel. She had assured him that music seemed to continue in the face of every difficulty, just as philosophy did. “We imagine our crises are unlike all other crises,” she said. “But they aren’t. There’s always been uncertainty. There’s always been danger. It’s the human condition—the normal one, perhaps.”

On Jamie’s free days, he took over responsibility for Charlie, allowing Isabel to attend to her job as editor, and owner too, of the Review of Applied Ethics. Charlie now went to a small nursery school round the corner, and Jamie would take him there at eight-thirty in the morning, deposit him in the classroom with his neatly packed tiffin box, and then return for him five hours later. After lunch, while Isabel worked in her study on the latest issue of the Review, Jamie would often supervise Charlie’s afternoon rest, read to him, play the piano with him, or take him for a walk by the canal or, as a special treat, to Blackford Pond. That pond, inhabited by a tribe of over-fed and demanding ducks, could keep Charlie amused for hours, and Jamie knew every inch of its muddy shore quite as well as an experienced mariner knows the bays and inlets of his native waters. He had also come to know the personality of the various ducks and could identify where each stood in order of precedence. Size, it seemed, was the sole determinant of that.

Even though she had made an early start while it was still comparatively cool, already the weather was making it difficult for Isabel to work. She had opened her study windows, but there was only an intermittent breeze and the air inside was heavy. Her study had a particular smell to it—the smell of paper, she had decided—and for some reason this oppressed her. Perhaps it was not a day on which to sequester oneself inside; perhaps it was simply not a day on which to do philosophy. Her friend, Julian Baggini, who, like her, edited a philosophical paper, seemed to be able to do his thinking in all sorts of circumstances—in the car, in a train, in the bath—but it was different for Isabel. It was true that thoughts came to her at the oddest of moments, but what she called organised thinking needed the time and place to be right; and the thinking she was trying to do that day—assessing submissions for a future issue of the Review—was definitely organised thinking.

She got up from her desk, putting aside the paper she had been trying to read. There was nothing wrong with the paper itself, which was a discussion of responsibility to future generations; there was no reason why it should not see the light of day. The author was a post-doctoral fellow at the University of Toronto and needed publications for the next stage of her career. Isabel knew just how competitive the academic world could be and just how easily people could fall at any of the fences that stood between them and a career as a philosopher.