The Revolving Door of Life 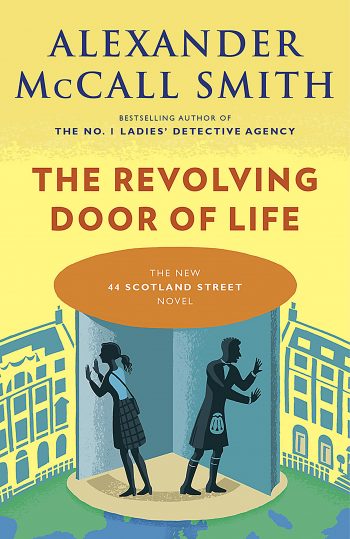 The Revolving Door of Life

The tenth book in the 44 Scotland Street series

The Revolving Door of Life: For young Bertie Pollock, life in Edinburgh has just gotten immeasurably better. The enforced absence of his endlessly pushy mother Irene—currently consciousness-raising in a Bedouin harem (don’t ask)—has manifold and immediate blessings: no psychotherapy, no Italian lessons, and no yoga classes. Bliss.

For Scotland Street’s grown-ups, life throws up some new dilemmas. Matthew makes a discovery that could make him even richer but also leaves him worried. Pat makes one that could make her poorer and her father miserable—unless that narcissist Bruce can help her out. And the Duke of Johannesburg, we discover, isn’t exactly who he says he is.

“McCall Smith is a tireless student of human nature, at once acutely observant and gently indulgent”
The Sydney Morning Herald
“A joyous, charming portrait of city life and human foibles”
Sunday Express

Matthew had read somewhere—in one of those hoary lists with which newspapers and magazines fill their columns on quiet days—that moving house was one of the most stressful of life’s experiences—even if not quite as disturbing as being the victim of an armed robbery or being elected president, nemine contradicente, of an unstable South American republic. Matthew faced no such threats, of course, but he nevertheless found the prospect of…
Read More

Matthew had read somewhere—in one of those hoary lists with which newspapers and magazines fill their columns on quiet days—that moving house was one of the most stressful of life’s experiences—even if not quite as disturbing as being the victim of an armed robbery or being elected president, nemine contradicente, of an unstable South American republic. Matthew faced no such threats, of course, but he nevertheless found the prospect of leaving India Street for the sylvan surroundings of Nine Mile Burn extremely worrying. And it made no difference that Nine Mile Burn was, as the name suggested, only nine miles from the centre of Edinburgh.

“What really worries me,” he confessed to Elspeth, “is the whole business of selling India Street. What if nobody wants to buy this flat? What then?”

He looked at her with unconcealed anxiety: he could imagine what it was like not to be able to sell one’s house. He had recently been at a party at which somebody had whispered pityingly of another guest: “He can’t sell his flat, you know.” He had looked across the room at the poor unfortunate of whom the remark was made and had seen a hodden-doon, depressed figure, visibly bent under the burden of unshiftable equity. That, he decided, was how people who couldn’t sell their house looked—shadowy figures, wraiths, as dejected and without hope as the damned in Dante’s Inferno, haunted by the absence of offers for an unmoveable property. He had shuddered at the thought and reflected on his good fortune at not being in that position himself. Yet here he was deliberately courting it ...

Elspeth’s attitude was more sanguine. She had been unruffled by their previous moves—from India Street to Moray Place, and then back again to India Street. The prospect of another flit—a Scots word that implies an attempt to evade the clutches of creditors or suggests, misleadingly, that moving is an airy, inconsequential thing—did not seem to trouble her, and she had no concerns about the sale of the flat. “But of course somebody will want to buy it,” she reassured him. “Why wouldn’t they? It’s one of the nicest flats in the street. It’s got plenty of room and bags of light. Who wouldn’t want to live in the middle of the Edinburgh New Town?”

Matthew frowned. “The New Town isn’t for everybody,” he said. “Not everybody finds the Georgian aesthetic pleasing.” He paused as he tried to think of a single person he knew of whom this was true. “There are plenty of people these days who are suburban rather than urban. People who like to have ... ” He paused for thought. He knew nobody like this, but they had to exist. “Who like to have garages. Homo suburbiensis. Morningside man, who is a bit like Essex man but just a touch ... ”

Elspeth smiled. “You shouldn’t worry so much, Matt, darlingest. And so what if we don’t sell it? We can afford the other place anyway.”

Matthew winced. “If I dip into capital,” he said.

Elspeth shrugged. “But isn’t money for spending? And surely there’s enough there to be dipped into.”

Matthew knew that she was right; at the last valuation, his portfolio of shares in the astute care of the Adam Bank had shot up and he could have bought the new house several times over if necessary. But Matthew had been imbued by his father with exactly that sense of caution that had created the fund in the first place, and the idea of selling shares in any but the direst of emergencies was anathema to him.

In general, Elspeth did not look too closely at Matthew’s financial affairs. She had never been much interested in money, and very rarely spent any on anything but family essentials and the occasional outfit or pair of shoes. She was nonetheless aware of their good fortune and of the fact that thanks to the generosity of Matthew’s businessman father they were spared the financial anxieties that affected most people. Her capacity for moral imagination, though, was such that she could understand the distorting effect that poverty had on any life, and she had never been, nor ever would become, indifferent to the lot of those—perhaps a majority of the population of Scotland—who were left with relatively little disposable income after the payment of monthly bills. This attitude was shared by Matthew, with the result that they were tactful about their situation—and generous too, when generosity was required.

The farmhouse near Nine Mile Burn had not been cheap. Although it was far enough from Edinburgh to avoid the high prices of the capital, it was close enough to be more expensive than houses in West Linton, a village that lay only a few miles further down the road. Their house, which they had agreed to buy from no less a person than the Duke of Johannesburg, who lived at Single Malt House not far away, had been valued at seven hundred thousand pounds. For that they got six bedrooms in the main house—along with a study, a gun room (Matthew did not have a gun, of course), and a drawing room with a good view of both the Lammermuir and Moorfoot Hills to the south and east; a tractor shed, a byre, and six acres of ground.

The Duke had been pleased that Matthew was the purchaser; they had met on several occasions before, although the Duke seemed to have only the vaguest idea of who Matthew was. Matthew’s quiet demeanour, however, had been enough to endear him to the Duke.

“I must say,” the Duke had remarked to a friend, “it’s a great relief to have found somebody who’s not in the slightest bit shouty. You know what I mean? Those shouty people one meets these days—all very full of themselves and brash. We used to have very few of them in Scotland, you know; now they’re on the rise, it seems.”
The friend knew exactly what the Duke meant. “Nouveau riche,” he said. “They’re flashy—they throw their money around.”

The Duke nodded. “Whereas I’m nouveau pauvre. I’ve got barely a sou these days, you know—not that I ever had very much.”

“Well, a sort of duke,” conceded the Duke. “I’m not in any of the stud books, you know: Debrett’s and so on. Or I’m in one of them—just—but I gather it’s not a very reliable one. It was rather expensive to get in; you had to buy sixty copies, as I recall, and I think quite a number of people in it are a bit on the ropey side. In fact, all of them are, I believe.”

“People take you at your own evaluation, I’ve always thought,” said the friend. “Behave like a duke and they’ll swallow it.”

“True,” said the Duke. “But frankly, that’s a bit difficult for me, old man. I’m not quite sure what the form is when it comes to being a pukka duke.”

“Take a look at some of the people who are what they claim to be,” advised the friend. “Watch the way they stand; the way they walk. They’re very sure-footed, I’m told. And they look down at the ground a lot.”

“That’s because they own it,” said the Duke. “Doesn’t apply to me—or not very much. I’ve got fifty-eight acres in Midlothian and forty-one up in Lochaber, but most of it is pretty scrubby. Lots of broom and rhododenrons.”

The friend looked thoughtful. “No, you’re not quite the real thing, I suppose. And then there’s always the risk that the Lord Lyon will catch up with you.”

The mention of the Lord Lyon made the Duke blanch. This was the King of Arms, the official who supervised all matters of heraldry and succession in Scotland. He had extensive legal powers and could prosecute people for the unauthorised use of coats of arms and the like.

“Do you think Lyon would ever bother about me?” asked the Duke nervously.

His friend looked out of the window. “You never know,” he said. “But I shouldn’t like to be in your shoes if he did.”