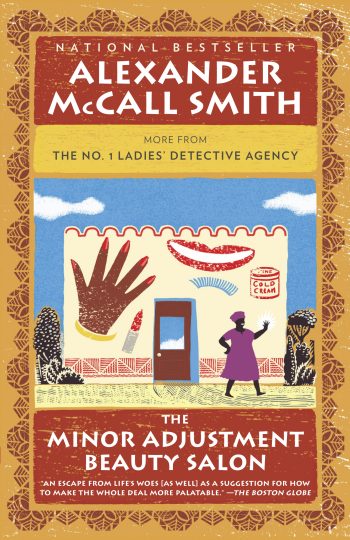 The fourteenth book in the No. 1 Ladies’ Detective Agency series

As Botswana awaits the familiar blessing of the rains and the resumption of the eternal cycle, a seismic upheaval is taking place at the No. 1 Ladies’ Detective Agency. Not only is Mr J. L. B. Matekoni attempting to reform himself into a modern husband, but after her marriage to Phuti Radiphuti, Mma Ramotswe’s challenging but irreplaceable associate Mma Makutsi has joyful news.

While the arrival of an heir to the Double Comfort Furniture empire keeps Mma Makutsi busy with motherhood, Mma Ramotswe must grapple alone with two puzzling cases. Disturbing developments over the will of a local dignitary, Edgar Molapo, point to fraud and a shocking family secret. And, tracing the source of a smear campaign against the Minor Adjustment Beauty Salon, in which notorious troublemaker Violet Sephotho may or not have a hand, will require a keen eye and an open mind.

Of course, Mma Ramotswe and Mr J. L. B. Matekoni had discussed the issue many times themselves, as they did that evening some months previously when he had first raised it with her. They were sitting on their veranda in that companionable manner that may come upon a married couple at the end of a day’s work, when they are together again and watching the sun sink behind the acacia…
Read More

Of course, Mma Ramotswe and Mr J. L. B. Matekoni had discussed the issue many times themselves, as they did that evening some months previously when he had first raised it with her. They were sitting on their veranda in that companionable manner that may come upon a married couple at the end of a day’s work, when they are together again and watching the sun sink behind the acacia trees and the untidy telephone wires of their neighbour’s garden. They had been talking about nothing in particular, with few matters that were likely to disturb the peace of this quiet half-hour before supper.

“I wonder when our neighbour is going to tidy up those wires,” mused Mr J. L. B. Matekoni. “You’d think that he’d get in touch with the telephone people and get them to come round and sort things out. I shouldn’t be surprised to find out that half those wires are dead—just ancient wires from the past.”

Mma Ramotswe glanced over the fence at the untidy cluster of wires attached to the wooden telephone pole. She felt that Mr J. L. B. Matekoni was probably right; the country was full of wires that might have done something important in the past but had long since stopped being used. She imagined somehow listening in to one of these wires and hearing the echoes of some forgotten exchange between people that had taken place many years before but still echoed through those old abandoned wires. One might hear a conversation that took place in 1962, perhaps, when Botswana was still the Bechuanaland Protectorate, and when cattle were the main industry and there were no diamonds. It might be a conversation between somebody in Lobatse driving up to see somebody in Gaborone and not requiring any directions because there were only a couple of roads. “You take the right-hand road. You know the right-hand road?”

Silence, empty silence, and then a faint, tinny voice ringing down the line. “I know that road, Rra. That is the road my grandfather lives on.”

The voice of the dead—you could hear them still, if you listened hard enough. Late people still talking, like children talking after lights-out: the faint, distant voices of our ancestors.

And then, as if he had already forgotten about the telephone wires, Mr J. L. B. Matekoni suddenly said, “Mma Makutsi?”

It was a question rather than a pronouncement, and Mma Ramotswe waited a moment or two before answering, in case the point of the question might be expanded upon. But it was not.

Mr J. L. B. Matekoni shrugged. “Nothing, Mma.” But it was not nothing. “I just happened to be wondering whether there was anything ... different about her?” He paused. “Now that she’s married, you see.”

“Of course not. But it is true, Mr J. L. B. Matekoni: marriage changes people. For some people it can be quite a surprise.”

“Yes, I know that, but there is something about Mma Makutsi I would like to raise, Mma—if you don’t mind.”

Mma Ramotswe looked at him expectantly. “Please do, Rra. We have all the time in the world.”

She gently encouraged him. “No, of course we don’t, but we certainly have enough time for you to say something.”

He looked out over the garden, out towards the mopipi tree of which Mma Ramotswe was so proud. Not everyone had a mopipi tree in the garden and she had been solicitous of its welfare, giving it more water than a tree might otherwise expect.

“A question,” he said. “When did Mma Makutsi get married? Was it seven months ago? Eight?”

Mma Ramotswe did a quick calculation. “It was just after the first rains, wasn’t it? Which makes it about ten or eleven months ago.”

Mr J. L. B. Matekoni looked thoughtful. “Then that is the answer,” he said.

“The answer to what? To when she got married?”

He shook his head. “Pregnant, Mma. Mma Makutsi must be pregnant.”