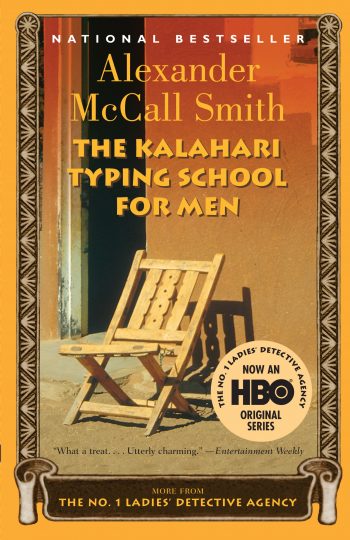 The fourth book in the No. 1 Ladies’ Detective Agency series

Mma Precious Ramotswe is content. Her business is well-established with many satisfied customers, and in her mid-thirties (“the finest age to be”) she has a house, two adopted children, and a fine fiancé. But as always there are  challenges.  Mr J. L. B. Matekoni has not yet set the date for their wedding. Mma Ramotswe is now a very busy lady, and must find the time to juggle her new clients with her personal life. Meanwhile, her able assistant, Mma Makutsi, has decided to establish a typing school for men. Most troublingly, a rival detective agency has opened in town–an agency that does not have the gentle approach to business that Mma Ramotswe’s does. Of course, Precious will manage these things, as she always does, with her unique insight and her good heart.

During Mr J. L. B. Matekoni’s illness they had moved the No. 1 Ladies’ Detective Agency into the back office at Tlokweng Road Speedy Motors. It had proved to be a successful arrangement: the affairs of the garage could be easily supervised from the back of the building and there was a separate entrance for agency clients. Each business benefited in other ways. Those who brought their cars in for…
Read More

During Mr J. L. B. Matekoni’s illness they had moved the No. 1 Ladies’ Detective Agency into the back office at Tlokweng Road Speedy Motors. It had proved to be a successful arrangement: the affairs of the garage could be easily supervised from the back of the building and there was a separate entrance for agency clients. Each business benefited in other ways. Those who brought their cars in for repair sometimes realised that there was a matter which might benefit from investigation—an errant husband, for example, or a missing relative—while others who came with a matter for the agency would arrange at the same time for their cars to be serviced or their brakes to be checked.

Mma Ramotswe and Mma Makutsi had arranged their desks in such a way that they could engage in conversation if they wished, without staring at one another all the time. If Mma Ramotswe turned in her chair, she could address Mma Makutsi on the other side of the room without having to twist her neck or talk over her shoulder, and Mma Makutsi could do the same if she needed to ask Mma Ramotswe for anything.

Now, with the day’s post of four letters attended to and filed, Mma Ramotswe suggested to her assistant that it was time for a cup of bush tea. This was a little earlier than normal, but it was a warm day and she always found that the best way of dealing with the heat was a cup of tea, accompanied by an Ouma’s rusk dipped into the liquid until it was soft enough to be eaten without hurting the teeth.

“Mma Makutsi,” Mma Ramotswe began after her assistant had delivered the cup of freshly made tea to her desk, “are you happy?”

Mma Makutsi, who was halfway back to her desk, stopped where she stood. “Why do you ask, Mma?” she said. “Why do you ask me if I’m happy?” The question had stopped her heart, as she lived in fear of losing her job and this question, she thought, could only be a preliminary to suggesting that she move on to another job. But there would be no other job, or at least no other job remotely like this one. Here she was an assistant detective and previously, and possibly still, an acting garage manager. If she had to go somewhere else, then she would revert to being a junior clerk, at best, or a junior secretary at somebody else’s beck and call. And she would never be as well paid as she was here, with the extra money that came to her for her garage work.

“Why don’t you sit down, Mma?” went on Mma Ramotswe. “Then we can drink our tea together and you can tell me if you are happy.”

Mma Makutsi made her way back to her desk. She picked up her cup, but her hand shook and she put it down again. Why was life so unfair? Why did all the best jobs go to the beautiful girls, even if they barely got fifty per cent in the examinations at the Botswana Secretarial College while she, with her results, had experienced such difficulty in finding a job at all? There was no obvious answer to that question. Unfairness seemed to be an inescapable feature of life, at least if you were Mma Makutsi from Bobonong in Northern Botswana, daughter of a man whose cattle had always been thin. Everything, it seemed, was unfair.

“I am very happy,” said Mma Makutsi miserably. “I am happy with this job. I do not want to go anywhere else.”

Mma Ramotswe laughed. “Oh, the job. Of course you’re happy with that. We know that. And we’re very happy with you. Mr J. L. B. Matekoni and I are very happy. You are our right-hand woman. Everybody knows that.”

It took Mma Makutsi a few moments to absorb this compliment, but, when she did, she felt relief flood through her. She picked up her tea cup, with a steady hand now, and took a deep draught of the hot red liquid.