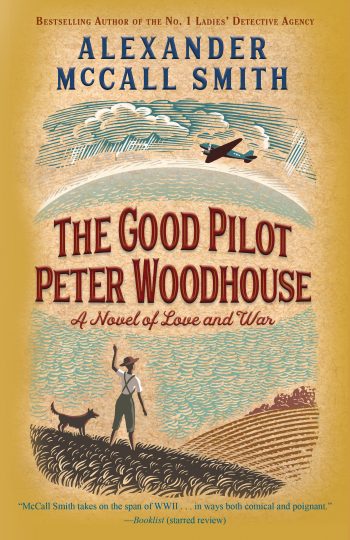 The Good Pilot is a stand alone novel, a heartwarming tale of hope and friendship set amid the turmoil of World War II.

Val Eliot, a young woman working on an English farm during the war, meets Mike, a U.S. Air Force pilot stationed nearby. When Val rescues a Border Collie named Peter Woodhouse, who is being mistreated by his owner, she realizes the dog would actually be safer with Mike. And so Peter Woodhouse finds a new home on the air force base, and Val finds herself falling in love. Peter Woodhouse becomes Dog First Class (the Good Pilot in the title), a canine mascot on the base who boldly accompanies the officers on their missions, and Val becomes Mike’s fiancée. But then a disaster jeopardizes the future of them all, and Peter Woodhouse brings Ubi, a German corporal, into their orbit, sparking a friendship that comes with great risk but carries with it the richest of rewards.

Infused with Alexander McCall Smith’s renowned charm and warmth, The Good Pilot Peter Woodhouse is an uplifting story of love and the power of friendship to bring sworn enemies together.

“Though he does not shy away from sadness, AMS always manages to emphasise the joy, and the love, and the small happinesses that make up all of our lives. I am once more back to waiting for the next book (thank goodness he writes so many!), because I devoured this far too quickly!”
thebookbag.co.uk
“Period pet lit from a pro”
The Mail on Sunday: Books of the Year
“I think it was Ian Rankin who claimed that as global politics becomes more turbulent, the world will increasingly find itself in need of Alexander McCall Smith’s heart-warming novels, and he is right. The latest McCall Smith opus, The Good Pilot Peter Woodhouse, is a gentle romp through the world of land girls, war-time romance and an exceptional pet—the amusingly-named sheepdog that gives the book its title… Of course, the story is not all happiness for Peter and his friends—there are trials and tragedies along the way. But fans of McCall Smith’s other work will not be disappointed”
The Scotsman
Close