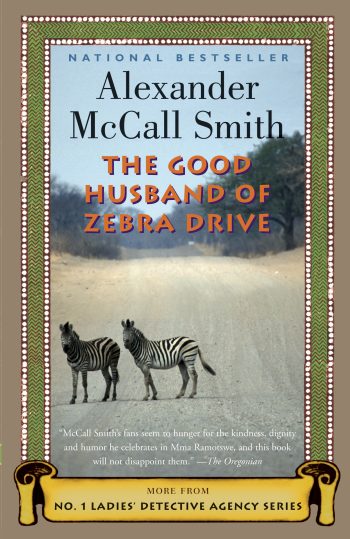 The eighth book in the No. 1 Ladies’ Detective Agency series

As winter turns to spring across Botswana, all is not quite as it should be on Zebra Drive. The cases keep coming into the No. 1 Ladies’ Detective Agency and Mma Makutsi’s impending marriage threatens her happy working relationship with Mma Ramotswe. Will the agency have the man-power to cope? Will Precious be able to explain an unexpected series of deaths at the hospital in Mochudi? And what about the missing office supplies at Teenie Magama’s printing company? In the midst of this, Mr J. L. B. Matekoni, trying to prove himself a worthy husband, decides to try a little detective work—and naturally, disaster looms.

Tender, witty and wise, this instalment in the lives of Alexander McCall’s Smith’s extended Botswana family reminds us of the importance of trust, love, and not judging by appearances—and shows us what really makes a good husband.

“Elegant, precise and evocative, McCall Smith tells an exceedingly good story with an underlying sense of decency so unfashionable that it appears ahead of its time”
The Herald
“McCall Smith’s fans seem to hunger for the kindness, dignity and humour he celebrates in Mma Ramotswe, and this book will not disappoint them”
The Oregonian
“A new adventure in a series that shows no signs of dropping in popularity or standard”
The Daily Telegraph

Once the children had set off for school, Mma Ramotswe and Mr J. L. B. Matekoni found themselves alone in the kitchen. The children always made a noise; now there was an almost unnatural quiet, as at the end of a thunderstorm or a night of high winds. It was a time for the two adults to finish their tea in companionable silence, or perhaps to exchange a few words…
Read More

Once the children had set off for school, Mma Ramotswe and Mr J. L. B. Matekoni found themselves alone in the kitchen. The children always made a noise; now there was an almost unnatural quiet, as at the end of a thunderstorm or a night of high winds. It was a time for the two adults to finish their tea in companionable silence, or perhaps to exchange a few words about what the day ahead held. Then, once the breakfast plates had been cleared up and the porridge pot scrubbed and put away, they would make their separate ways to work, Mr J. L. B. Matekoni in his green truck and Mma Ramotswe in her tiny white van. Their destination was the same—the No. 1 Ladies’ Detective Agency shared premises with Tlokweng Road Speedy Motors—but they invariably arrived at different times. Mr J. L. B. Matekoni liked to drive directly to the top of the Tlokweng Road along the route that went past the flats at the end of the university, while Mma Ramotswe, who had a soft spot for the area of town known as the Village, would meander along Oodi Drive or Hippopotamus Road and approach the Tlokweng Road from that direction.

“There’s something I meant to mention to you,” he said casually. “I forgot to tell you about it yesterday. You were in Molepolole, you see.”

She nodded. “Yes, I went to Molepolole.”

His eyes were still fixed on the ceiling. “And Molepolole? How was Molepolole?”

She smiled. “You know what Molepolole is like. It gets a bit bigger, but not much else has changed. Not really.”

“I’m not sure that I would want Molepolole to change too much,” he said.

She waited for him to continue. Something important was definitely about to emerge, but with Mr J. L. B. Matekoni these things could take time.

“Somebody came to see you at the office yesterday,” he said. “When Mma Makutsi was out.”

This surprised Mma Ramotswe and, in spite of her equable temperament, irritated her. Mma Makutsi had been meant to be in the office throughout the previous day, in case a client should call. Where had she been?

“So Mma Makutsi was out?” she said. “Did she say where?” It was possible that some urgent matter of business had arisen and this had required Mma Makutsi’s presence elsewhere, but she doubted that. A more likely explanation, thought Mma Ramotswe, was urgent shopping, probably for shoes.

Mr J. L. B. Matekoni lowered his gaze from the ceiling and fixed it on Mma Ramotswe. He knew that his wife was a generous employer, but he did not want to get Mma Makutsi into trouble if she had deliberately disobeyed instructions. And she had been shopping; when she had returned, just before five in the afternoon—a strictly token return, he thought at the time—she had been laden with parcels and had unpacked one of these to show him the shoes it contained. They were very fashionable shoes, she had assured him, but in Mr J. L. B. Matekoni’s view they had been barely recognisable as footwear, so slender and insubstantial had seemed the criss-crossings of red leather which made up the upper part of the shoes.

“Perhaps,” said Mr J. L. B. Matekoni. He tended to be defensive about Mma Makutsi, whom he admired greatly. He knew what it was like to come from nowhere, with nothing, or next to nothing, and make a success of one’s life. She had done that with her ninety-seven per cent and her part-time typing school, and now, of course, with her well-heeled fiancé. He would defend her. “But there was nothing going on. I’m sure she had done all her work.”

“But something did turn up,” pointed out Mma Ramotswe. “A client came to see me. You’ve just said that.”

Mr J. L. B. Matekoni fiddled with a button on the front of his shirt. He was clearly embarrassed about something.

“Well, I suppose so. But I was there to deal with things. I spoke to this person.”

Mr J. L. B. Matekoni hesitated. “I was able to deal with the situation,” he said. “And I have written it all down to show you.” He reached into a pocket and took out a folded sheet of paper, which he handed to Mma Ramotswe.