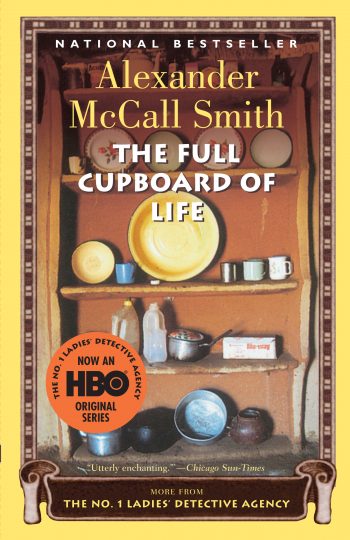 The fifth book in the No. 1 Ladies’ Detective Agency series

The Full Cupboard of Life: Still engaged to the estimable Mr J.L.B. Matekoni, Mma Ramotswe wonders when a date for her wedding will be named, but she doesn’t want to put too much pressure on her fiancé. For indeed he has other things on his mind, including a hair-raising request made of him from Mma Potokwane, the ever-persuasive matron of the orphan farm.

Besides, Mma herself has weighty matters on her mind. She has been approached by a wealthy lady—whose fortune comes from successful hair-braiding salons—and has been asked to check up on several suitors. Are these men just interested in the lady or just her money? This may be difficult to find out, but it’s just the kind of problem Mma Ramotswe likes and she is, of course, a very intuitive lady.

“Refreshing, funny and life-affirming”
Geographical
“Addictive … our reviewer was so entertained, she bought the rest of the series!”
Marie Claire

As Mma Ramotswe sat at her desk, she heard sounds of activity from the garage on the other side of the building. Mr J. L. B. Matekoni was at work with his two apprentices, young men who seemed entirely obsessed with girls and who were always leaving grease marks about the building. Around each light switch, in spite of many exhortations and warnings, there was an area of black discolouration,…
Read More

As Mma Ramotswe sat at her desk, she heard sounds of activity from the garage on the other side of the building. Mr J. L. B. Matekoni was at work with his two apprentices, young men who seemed entirely obsessed with girls and who were always leaving grease marks about the building. Around each light switch, in spite of many exhortations and warnings, there was an area of black discolouration, where the apprentices had placed their dirty fingers. And Mma Ramotswe had even found greasy fingerprints on her telephone receiver and, more irritatingly still, on the door of the stationery cupboard.

“Mr J. L. B. Matekoni provides towels and all that lint for wiping off grease,” she had said to the older apprentice. “They are always there in the washroom. When you have finished working on a car, wash your hands before you touch other things. What is so hard about that?”

“I always do that,” said the apprentice. “It is not fair to talk to me like that, Mma. I am a very clean mechanic.”

“Then is it you?” asked Mma Ramotswe, turning to the younger apprentice.

“I am very clean too, Mma,” he said. ‘I am always washing my hands. Always. Always.”

“Then it must be me,” said Mma Ramotswe. “I must be the one with greasy hands. It must be me or Mma Makutsi. Maybe we get greasy from opening letters.”

The older apprentice appeared to think about this for a moment. “Maybe,” he said.

“There’s very little point in trying to talk to them,” Mr J. L. B. Matekoni had observed when Mma Ramotswe subsequently told him of this conversation. “There is something missing in their brains. Sometimes I think it is a large part, as big as a carburettor maybe.”

Now Mma Ramotswe heard the sound of voices coming from the garage. Mr J. L. B. Matekoni was saying something to the apprentices, and then there came a mumbling sound as one of the young men answered. Another voice; this time raised; it was Mr J. L. B. Matekoni.

Mma Ramotswe listened. They had done something again, and he was reprimanding them, which was unusual. Mr J. L. B. Matekoni was a mild man, who did not like conflict, and always spoke politely. If he felt it necessary to raise his voice, then it must have been something very annoying indeed.

“Diesel fuel in an ordinary engine,” he said, as he entered her office, wiping his hands on a large piece of lint. “Would you believe it, Mma Ramotswe? That ... that silly boy, the younger one, put diesel fuel into the tank of a non-diesel vehicle. Now we have to drain everything out and try to clean the thing up.”

“I’m sorry,” said Mma Ramotswe. “But I am not surprised.” She paused for a moment. “What will happen to them? What will happen when they are working somewhere else—somewhere where there is no longer a kind person like you to watch over them?”

Mr J. L. B. Matekoni shrugged. “They will ruin cars left, right, and centre,” he said. “That is what will happen to them. There will be great sadness among the cars of Botswana.”

Mma Ramotswe shook her head. Then, on a sudden impulse, and without thinking at all why she should say this, she asked, “And what will happen to us, Mr J. L. B. Matekoni?”

The words were out, and Mma Ramotswe looked down at her hands on the desk, and at the diamond ring, which looked back up at her. She had said it, and Mr J. L. B. Matekoni had heard what she had said.

Mr J. L. B. Matekoni looked surprised. “Why do you ask, Mma? What do you mean when you ask what will happen to us?”