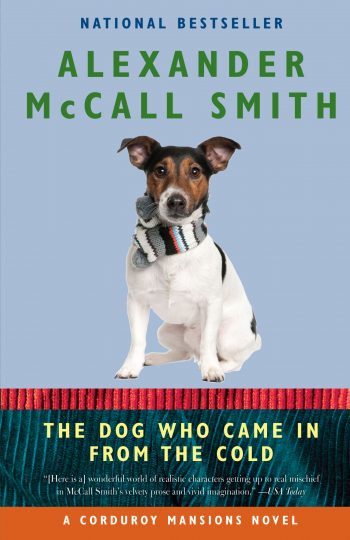 The second book in the Corduroy Mansions series

In the genteel environs of Corduroy Mansions, strange doings are afoot, mostly in the name of love. Lonely William French and his faithful canine Freddie de la Hay are recruited to MI6 by a beguiling lady operative, William’s neighbour Caroline finds suitor James mysteriously lacking, and Barbara Ragg is tempted to the Highlands by blossoming romance. Meanwhile sage psychiatrist Berthea Snark, under normal circumstances the voice of reason, finds herself called away to protect her brother from a band of scheming New Age fraudsters seeking to insert themselves into the bosom of the family.

“You cannot beat McCall Smith for subtle musings shot through with insight and wit. His deft characterisation enlivens the inner workings of everyday characters and his work offers a heartening view of a world that often appears heartless”
The Telegraph
“The sharemarket can crash and so can giant waves, but if you can cuddle up with McCall Smith’s beautifully drawn and entertaining characters, his quirky situations, funny jokes as well as a dash of spine stiffening, then all is not lost”
The Age (Melbourne)
“[Here is a] wonderful world of realistic characters getting up to real mischief in McCall Smith’s velvety prose and vivid imagination”
USA Today
“McCall Smith is a writer of such fond, heartfelt geniality that … fans will be grateful that the series has just begun”
Entertainment Weekly

William French, wine merchant, Master of Wine (failed), somewhere in his early fifties (hardly noticeably, particularly in the right light), loyal subscriber to Rural Living (although he lived quite happily in central London), long-time supporter of several good causes (he was a kind man at heart, with a strong sense of fairness), widower, dog-owner, and much else besides; the same William French looked about his flat in Corduroy Mansions, as…
Read More

William French, wine merchant, Master of Wine (failed), somewhere in his early fifties (hardly noticeably, particularly in the right light), loyal subscriber to Rural Living (although he lived quite happily in central London), long-time supporter of several good causes (he was a kind man at heart, with a strong sense of fairness), widower, dog-owner, and much else besides; the same William French looked about his flat in Corduroy Mansions, as anybody might survey his or her flat in a moment of self-assessment, of stocktaking.

There was a lot wrong with it, he decided, just as he felt there was a lot that was not quite right with his life in general. Sorting out one’s flat, though, is often easier than sorting out oneself, and there is a great deal to be said for first getting one’s flat in order before attempting the same thing with one’s life. Perhaps there was an adage for this—a pithy Latin expression akin to mens sana in corpore sano. Which made him think ... Everybody knew that particular expression, of course; everybody, that is, except William’s twenty-eight-year-old son, Eddie, who had once rendered it within his father’s hearing as “men’s saunas lead to a healthy body”. William had been about to laugh at this ingenious translation, redolent, as it was, of the cod Latin he had found so achingly funny as a twelve-year-old boy: Caesar adsum iam forte, Pompey ad erat. Pompey sic in omnibus, Caesar sic in at. Caesar had some jam for tea, Pompey had a rat ... and so on. But then he realised that Eddie was serious.

The discovery that Eddie had no knowledge of Latin had depressed him. He knew that the overwhelming majority of people had no Latin and did not feel the lack of it. The problem with Eddie, though, was that not only did he not have Latin, he had virtually nothing else either: no mathematics worthy of the name, no geography beyond a knowledge of the location of various London pubs, no knowledge of biology or any of the other natural sciences, no grasp of history. When it came to making an inventory of what Eddie knew, there was really very little to list.

He put his son out of his mind and returned to thinking about the proposition mens sana in corpore sano. Was there an equivalent, he wondered, to express the connection between an ordered flat and an ordered life? Vita ordinata in domo ordinata? It sounded all right, he felt—indeed, it sounded rather impressive—but he found himself feeling a little bit unsure about the Latin. Domus was feminine, was it not? But was it not one of those fourth declension nouns where there was an alternative ablative form—domu rather than domo? William was not certain, and so he put that out of his mind too.

He walked slowly about his flat, moving from room to room, thinking of what would be necessary to reform it completely. Starting in the drawing room, he looked at the large oriental carpet that dominated the centre of the room. It was said that some such carpets gained in value as the years went past, but he could not see this happening to his red Baluch carpet, which was beginning to look distinctly tattered at the edges. Then there was the furniture, and here there was no doubt that the chairs, if once they had been fashionable, no longer were. If there was furniture that spoke of its decade, then these chairs positively shouted the seventies, a period in which it was generally agreed design lost its way. It would all, he thought, have to be got rid of and replaced with the sort of furniture that he saw advertised in the weekend magazines of the newspapers. Timeless elegance was the claim made on behalf of such furniture, and timeless elegance, William considered, was exactly what he needed.

He would give his own furniture to one of those organisations that collect it and pass it on to people who have no furniture of their own and no money to buy any. The thought of this process gave him a feeling of warmth. He could just imagine somebody in a less favoured part of London waiting with anticipation as a completely free consignment of surplus furniture – in this case William’s—was unloaded. He pictured a person who had previously sat on the floor now sitting comfortably on this Corduroy Mansions armchair, not noticing the large stain on the cushion of which Eddie had denied all knowledge, though it was definitely his responsibility. It was a most unpleasant stain, that one, and William had never enquired as to exactly what it was. Yet he had noticed that Marcia, when she had lived with him, had studiously avoided ever sitting on that chair. And who could blame her?
Our furniture, he reflected, says so much about us, and our tastes—perhaps more than we like to acknowledge. We may not like a piece of furniture now, but the awkward fact remains that we once were a person who liked it. And unlike clothes, which are jettisoned with passing fashion, furniture has a habit of staying with us, reminding us of tasteless stages of our lives. William looked at his settee; he had bought it at a furniture shop off the Tottenham Court Road—he remembered that much—but he would never buy something like that now. And certainly not in that colour. Did they still make mauve furniture? he wondered.

He moved on to the kitchen. William liked his kitchen, and often sat there on summer evenings, looking out of the window over the roof-tops behind Corduroy Mansions, watching the sun sink over west London. Sometimes, if conditions were right, the dying sun would touch the edge of the clouds with gold, making for a striking contrast with the sky beyond, as sharply delineated as in a Maxfield Parrish painting. He would sit there and think about nothing in particular, vaguely grateful for the display that nature was providing but also conscious of the fact that there was not enough beauty in his life and that it would be nice to have more.

Now, surveying his kitchen from the doorway, he saw not the outside vista but the inside—the cork floor that needed replacing, the scratched surfaces that surely fostered an ecosystem in which whole legions, entire divisions of Pseudomonas were encamped. Best not to think about that, nor about the bacteria which undoubtedly romped around the faithful body of his dog, Freddie de la Hay, who was sitting on the kitchen floor, looking up at his master in mute adoration, and wondering, perhaps, what the problem was.