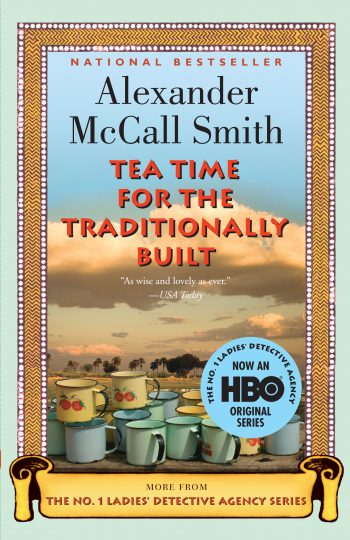 The tenth book in the No. 1 Ladies’ Detective Agency series

There are things that some men know and some ladies do not, and vice versa. It is unfortunate, for example, that Mma Ramotswe’s newest client is the big-shot owner of the ailing Kalahari Swoopers, and that the one thing this lady detective knows very little about is football.

And when Mma Makutsi’s unsuspecting fiancé Phuti Radphuti hires her longtime nemesis, the very glamorous Violet Sephotho, to assist in his store,  it becomes clear that some men do not know how to recognise a ruthless jezebel—even when she is bouncing up and down on the best bed in the Double Comfort Furniture Shop.

Mma Ramotswe ventures into new territory as she attempts to foster understanding between the sexes and find the cause of the football club’s unexpected losing streak. She drinks tea in unfamiliar kitchens, and finds we must dig deep to uncover the goodness of the human heart.

“[McCall Smith is] a master … As McCall Smith’s readers have come to expect, there’s beauty and revelation of one kind or another woven expertly into every line”
The Christian Science Monitor
“Pure joy from beginning to end”
Good Reading Magazine

Traditionally built people may not look as if they are great walkers, but there was a time when Precious Ramotswe walked four miles a day. As a girl in Mochudi, all those years ago, a pupil at the school that looked down over the sprawling village below, she went to her lessons every morning on foot, joining the trickle of children that made its way up the hill, the girls…
Read More

Traditionally built people may not look as if they are great walkers, but there was a time when Precious Ramotswe walked four miles a day. As a girl in Mochudi, all those years ago, a pupil at the school that looked down over the sprawling village below, she went to her lessons every morning on foot, joining the trickle of children that made its way up the hill, the girls in blue tunics, the boys in khaki shirts and shorts, like little soldiers. The journey from the house where she lived with her father and the older cousin who looked after her took all of an hour, except, of course, when she was lucky and managed to ride on the mule-drawn water cart that occasionally passed that way. The driver of this cart, with whom her father had worked in the gold mines as a young man, knew who she was and always slowed down to allow her to clamber up on the driver’s seat beside him.

Other children would watch enviously, and try to wave down the water cart. ‘I cannot carry all Botswana,’ said the driver. ‘If I gave all you children a ride on my cart, then my poor mules would die. Their hearts would burst. I cannot allow that.’

‘But you have Precious up there!’ called out the boys. ‘Why is she so special?’

The driver looked at Precious and winked. ‘Tell them why you are special, Precious. Explain it to them.’

The young Mma Ramotswe, barely eight, was overwhelmed by embarrassment.

‘You are the daughter of Obed Ramotswe,’ said the driver. ‘He is a great man. That is why you are riding up here.’

He was right, of course—at least in what he said about Obed Ramotswe, who was, by any standards, a fine man. At that age, Precious had only a faint inkling of what her father stood for; later on, as a young woman, she would come to understand what it was to be the daughter of Obed Ramotswe. But in those days, on the way to school, whether riding in state on the water cart or walking along the side of that dusty road with her friends, she had school to think about, with its lessons on so many subjects—the history of Botswana, from the beginning, when it was known as Khama’s country, across the plains of which great lions walked, to the emergence of the new Botswana, then still a chrysalis in a dangerous world; writing lessons, with the letters of the alphabet being described in white chalk on an ancient blackboard, all whirls and loops; arithmetic, with its puzzling multiplication tables that needed to be learned by heart—when there was so much else that the heart had to learn.

The water cart, of course, did not pass very often, and so on most days there was a long trudge to school and a long walk back. Some children had an even greater journey; in one class there was a boy who walked seven miles there and seven miles back, even in the hottest of months, when the sun came down upon Botswana like a pounding fist, when the cattle huddled together under the umbrella shade of the acacia trees, not daring to wander off in search of what scraps of grass remained. This boy thought nothing of his daily journey; this is what you did if you wanted to go to school to learn the things that your parents had never had the chance to learn. And you did not complain, even if during the rainy season you might narrowly escape being struck by lightning or being washed away by the torrents that rose in the previously dry watercourses. You did not complain in that Botswana.