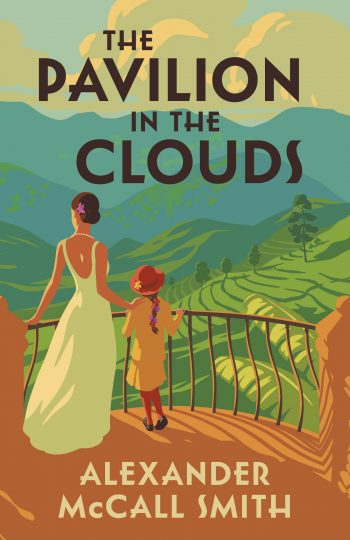 The Pavilion in the Clouds is a new stand-alone novel from the master storyteller.

It is 1938 and the final days of the British Empire. In a bungalow high up in the green hills above the plains of Ceylon, under a vast blue sky, live the Ferguson family: Bella, a precocious eight-year-old; her father Henry – owner of Pitlochry, a tea plantation – and her mother Virginia. The story centres around the Pavilion in the Clouds, set in the idyllic grounds of the plantation, carved out of the wilderness. But all is not as serene as it seems. Bella is suspicious of her governess, Miss White’s intentions. Her suspicion sparks off her mother’s imagination and after an unfortunate series of events, a confrontation is had with Miss White and a gunshot rings off around the hills.

A true classic of the imagination from the pen of Alexander McCall Smith. This is a novel that will transport readers from armchair to Ceylon in just the same ways in which The No. 1 Ladies’ Detective Agency transports them to Botswana – you will feel the heat of the sun, the length of the days, the love of an author for a country. And you will feel the angst of a family far from home and watch as their lives start to unravel.

‘Tinged with humour, this enigmatic and hauntingly hope-filled tale is inspired by McCall Smith’s many trips to the now Sri Lanka and his keen interest in pioneering fellow Scots such as Thomas Lipton, who made the tea industry what it is today… Although set in the past, The Pavilion In The Clouds, has profound resonance today’
Sunday Post
‘Strong characters and beautiful settings, from the mountainous tea plantation in Ceylon to the rolling hills of the Scottish countryside’
Asian Review of Books
‘The ever fecund Alexander McCall Smith continues to surprise as well as please… This is one of the most enjoyable of his many enjoyable novels’
Allan Massie, The Scotsman
‘A stirring, evocative psychological mystery set in 1938 as the British Empire limps through its final days… Focused on a Scottish family in 1930s Sri Lanka, this utterly engaging standalone novel shimmers with atmosphere and family tension’
LoveReading
Close