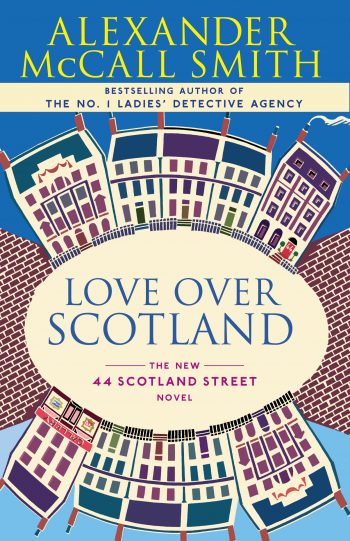 The third book in the 44 Scotland Street series

Back to Scotland Street we go, and six-year old Bertie is still battling against his insufferable mother and her psychotherapist crony Dr Fairbairn, making a short-lived bid for freedom on a trip to Paris with the Edinburgh Youth Orchestra. Domenica sets off on an anthropological odyssey with pirates in the Malacca Straits, while Pat attracts several handsome admirers, including a toothsome suitor named Wolf. Meanwhile Big Lou, eternal source of coffee and good advice to her friends, has love, heartbreak and erstwhile boyfriend Eddie’s misdemeanours on her own mind.

At the end of the seminar, when Dr Fantouse had shuffled off in what can only have been disappointment and defeat, back to the Quattrocento, the students snapped shut their notebooks, yawned, scratched their heads, and made their way out of the seminar room and into the corridor. Pat had deliberately avoided looking at Wolf, but she was aware of the fact that he was slow in leaving the seminar…
Read More

At the end of the seminar, when Dr Fantouse had shuffled off in what can only have been disappointment and defeat, back to the Quattrocento, the students snapped shut their notebooks, yawned, scratched their heads, and made their way out of the seminar room and into the corridor. Pat had deliberately avoided looking at Wolf, but she was aware of the fact that he was slow in leaving the seminar room, having dropped something on the floor, and was busy searching for it. There was a noticeboard directly outside the door, and she stopped at this, looking at the untidy collection of posters which had been pinned up by a variety of student clubs and societies. None of these was of real interest to her. She did not wish to take up gliding and had only a passing interest in salsa classes. Nor was she interested in teaching at an American summer camp, for which no experience was necessary, although enthusiasm was helpful. But at least these notices gave her an excuse to wait until Wolf came out, which he did a few moments later.

She stood quite still, peering at the small print on the summer camp poster. There was something about an orientation weekend and insurance, and then a deposit would be necessary unless ...

“Not a nice way to spend the summer,” a voice behind her said. “Hundreds of brats. No time off. Real torture.”

She turned round, affecting surprise. “Yes,” she said. “I wasn’t really thinking of doing it.”

“I had a friend who did it once,” said Wolf. “He ran away. He actually physically ran away to New York after two weeks.” He looked at his watch and then nodded in the direction of the door at the end of the corridor. “Are you hungry?”

Pat was not, but said that she was. “Ravenous.”

“We could go up to the Elephant House,” Wolf said, glancing at his watch. “We could have coffee and a sandwich.”

They walked through George Square and across the wide space in front of the McEwan Hall. In one corner, their skateboards at their feet, a group of teenage boys huddled against the world, caps worn backwards, baggy, low-crotched trousers half-way down their flanks. Pat had wondered what these youths talked about and had concluded that they talked about nothing, because to talk was uncool. Perhaps Domenica could do field work outside the McEwan Hall—once she had finished with her Malacca Straits pirates—living with the skateboarders, in a little tent in the rhododendrons at the edge of the square, observing the socio-dynamics of the group, the leadership struggles, the badges of status. Would they accept her, she wondered? Or would she be viewed with suspicion, as an unwanted visitor from the adult world, the world of speech?

She found out a little bit more about Wolf as they made their way to the Elephant House. As they crossed the road at Napier’s Health Food Shop, Wolf told her that his mother was an enthusiast of vitamins and homeopathic medicine. He had been fed on vitamins as a boy and had been taken to a homeopathic doctor, who gave him small doses of carefully chosen poison. The whole family took Echinacea against colds, regularly, although they still got them.

“It keeps her happy,” he said. “You know how mothers are. And it’s cool by me if my mother’s unstressed. You know what I mean?”

Pat thought she did. “That’s cool,” she said.

And then he told her that he came from Aberdeen. His father, he said, was in the oil business. He had a company which supplied valves for off-shore wells. They sold valves all over the world, and his father was often away in places like Houston and Brunei. He collected air miles which he gave to Wolf.

“I can go anywhere I want,” he said. “I could go to South America, if I wanted. Tomorrow. All on air miles.”

“I haven’t got any air miles,” said Pat.

Wolf shrugged. “No big deal,” he said. “You don’t really need them.”

“Do you think that Dr Fantouse has any air miles?” asked Pat suddenly.