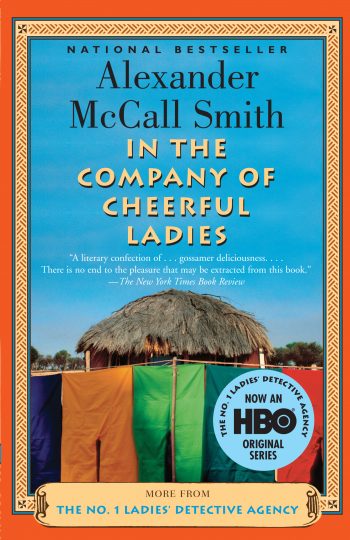 The sixth book in the No. 1 Ladies’ Detective Agency series

In the Company of Cheerful Ladies: Precious Ramotswe is busier than ever at the detective agency when she discovers an intruder in her house on Zebra Drive—and perhaps even more baffling—a pumpkin on her porch. Her associate, Mma Makutsi, also has a full plate. She’s taken up dance lessons, only to be partnered with a man with two left feet. And at Tlokweng Road Speedy Motors, where Mma Ramotswe’s husband,  Mr J.L.B. Matekoni is already overburdened with work, one of his apprentices has run off with a wealthy older woman. But what finally rattles Mma Ramotswe’s normally unshakable composure is a visitor who forces her to confront a difficult secret from her past.

“[McCall Smith’s] style melts words into instant meaning and the music of all the novel’s principal voices is a chorus you cannot resist”
The Scotsman
“A literary confection … Fortunately, since texts aren’t cakes, there is no end to the pleasure”
The New York Times Book Review

Mma Ramotswe raised her tea cup to her lips and looked out over the brim. At the edge of the car park, immediately in front of the café, a small market had been set up, with traders’ stalls and trays of colourful goods. She watched as a man attempted to persuade a customer to buy a pair of sunglasses. The woman tried on several pairs, but was not satisfied, and…
Read More

Mma Ramotswe raised her tea cup to her lips and looked out over the brim. At the edge of the car park, immediately in front of the café, a small market had been set up, with traders’ stalls and trays of colourful goods. She watched as a man attempted to persuade a customer to buy a pair of sunglasses. The woman tried on several pairs, but was not satisfied, and moved on to the next stall. There she pointed to a small piece of silver jewellery, a bangle, and the trader, a short man wearing a wide-brimmed felt hat, passed it across to her to try on. Mma Ramotswe watched as the woman held out her wrist to be admired by the trader, who nodded encouragement. But the woman seemed not to agree with his verdict, and handed the bangle back, pointing to another item at the back of the stall. And at that moment, while the trader turned round to stretch for whatever it was that she had singled out, the woman quickly slipped another bangle into the pocket of the jacket she was wearing.

Mma Ramotswe gasped. This time, she could not sit back and allow a crime to be committed before her very eyes. If people did nothing, then no wonder that things were getting worse. So she stood up, and began to walk firmly towards the stall where the woman had now engaged the trader in earnest discussion about the merits of the merchandise which he was showing her.

The voice came from behind her, and Mma Ramotswe turned round to see who had addressed her. It was the waitress, a young woman whom Mma Ramotswe had not seen at the café before.

The waitress pointed an accusing finger at her. “You cannot run away like that,” she said. “I saw you. You’re trying to go away without paying the bill. I saw you.”

For a moment Mma Ramotswe was unable to speak. The accusation was a terrible one, and so unwarranted. Of course she had not been trying to get away without paying the bill—she would never do such a thing; all she was doing was trying to stop a crime being committed before her eyes. She recovered herself sufficiently to reply. “I am not trying to go away, Mma,” she said. “I am just trying to stop that person over there from stealing from that man. Then I would have come back to pay.”

The waitress smiled knowingly. “They all find some excuse,” she said. “Every day there are people like you. They come and eat our food and then they run away and hide. You people are all the same.”

Mma Ramotswe looked over towards the stall. The woman had begun to walk away, presumably with the bangle still firmly in her pocket. It would now be too late to do anything about it, and all because of this silly young woman who had misunderstood what she was doing.

She went back to her table and sat down. “Bring me the bill,” she said. “I will pay it straightaway.”

The waitress stared at her. “I will bring you the bill,” she said. “But I shall have to add something for myself. I will have to add this if you do not want me to call the police and tell them about how you tried to run away.”

As the waitress went off to fetch the bill, Mma Ramotswe glanced around her to see if people at the neighbouring tables had witnessed the scene. At the table next to hers, a woman sat with her two young children, who were sipping with evident pleasure at large milkshakes. The woman smiled at Mma Ramotswe, and then turned her attention back to the children. She had not seen anything, thought Mma Ramotswe, but then the woman leaned across the table and addressed a remark to her.

“Bad luck, Mma,” she said. “They are too quick in this place. It is easier to run away at the hotels.”

For a few minutes Mma Ramotswe sat in complete silence, reflecting on what she had seen. It was remarkable. Within a very short space of time she had seen an instance of bare-faced theft, had encountered a waitress who thought nothing of extorting money, and then, to bring the whole matter to a shameful conclusion, the woman at the next table had disclosed a thoroughly dishonest view of the world. Mma Ramotswe was frankly astonished. She thought of what her father, the late Obed Ramotswe, a fine judge of cattle but also a man of the utmost propriety, would have thought of this. He had brought her up to be scrupulously honest, and he would have been mortified to see this sort of behaviour.