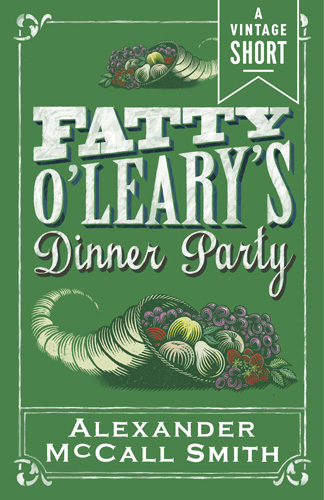 Fatty O’Leary has always wanted to visit the home of his ancestors. So his loving wife Betty plans a trip to Ireland for his 40th birthday—and almost immediately, things go wrong. The seats in economy class on the plane are too small; Irish bathroom furniture is not as commodious as he might have liked; and all the time Fatty must put up with the unthinking cruelty of strangers.

In a hilarious and touching portrayal of a kindly and misunderstood soul, Alexander McCall Smith has created yet another memorable character destined to become an instant favourite.

Winner of the Bollinger Everyman Wodehouse Prize for Comic Fiction 2015

“Once again McCall Smith doles out an appropriately extra-large helping of fun”
Scotland on Sunday
“McCall Smith has successfully managed to balance humour with compassion to give the reader an experience that is amusing, a little sad in places, but ultimately heart-warming and affirming”
Scottish Field
“Alexander McCall Smith is reliably and effortlessly amusing in a short comic novel that’s light, upbeat and diverting”
The Herald

Cornelius Patrick O’Leary had been known as Fatty O’Leary from the time he was twelve, which was in the early 1950s. People were less sensitive then to the feelings of people around them, and many of the nicknames they gave to others were thoughtlessly unkind. Yet in those more robust, not to say careless days, those to whom disparaging nicknames were given sometimes appeared to accept the situation. Or so…
Read More

Cornelius Patrick O’Leary had been known as Fatty O’Leary from the time he was twelve, which was in the early 1950s. People were less sensitive then to the feelings of people around them, and many of the nicknames they gave to others were thoughtlessly unkind. Yet in those more robust, not to say careless days, those to whom disparaging nicknames were given sometimes appeared to accept the situation. Or so it seemed on the surface: people suffered in silence then, enduring things that today people simply would not bear, while all the time they smarted under the casual cruelty of a derogatory nickname. Cornelius O’Leary, though, was not like this: he never objected to being called Fatty, and even signed himself as such.

He was a good man, and a kind one. If those who first called him Fatty—those childhood friends, the boys in the boy scouts, the slightly simple man who served sodas in the drug store who delighted in inventing a nickname for every customer—had done so with the intent to belittle or provoke him, then he forgave them; forgiveness came easily to Fatty—it was easier, he thought, to like people than to dislike them, however they behaved towards you. Dislike required energy and a good memory for slights; geniality was so much less demanding, and at the end of the day felt better too.

He was indifferent to the embarrassed surprise that people sometimes showed when he used the name of himself. “It’s simpler than signing Cornelius,” he said with a disarming smile. “Two syllables rather than four. It saves time.” And then he added, “And I could do to lose a bit round the middle, I suppose—but who couldn’t?”

Fatty lived in Fayetteville, Arkansas, a pleasant college town on the edge of the Ozarks. He was the son of a comfortably-off local businessman who owned a small furniture factory, a warehouse, a motel, and a bar that was popular with students from the university. Those were the profitable parts of the family business, but not the interesting bit. That was an antique store that Fatty ran personally, leaving the other concerns in the hands of a manager. Fatty knew a great deal about antique furniture; he had a good eye for it and had even written the occasional article in a furniture magazine published in Boston. He was particularly proud of those articles, which were framed and hung in prominent places round the house.

Fatty’s wife was called Betty; she was the former Miss Elizabeth Shaugnessy, of Mobile, Alabama. They had met when they were both at the University of Notre Dame. Betty had fallen in love with Fatty the first time she saw him—and he with her. They were ideally suited, and while most married couples cannot say with complete honesty that they had never fought with one another over anything, Fatty and Betty could do just that.

Fatty’s two closest old friends in Fayetteville were Tubby O’Rourke and Porky Flanagan. Tubby was an accountant with an interest in model railways; Porky was a dentist who ran a dental practice set up by his father and his uncle. He did not really enjoy dentistry and had complained to Fatty on more than one occasion that it was his uncle, in particular, who had leant on him to go to dental school.

“All he thinks about is teeth, Fatty. Mention a name and he says, I know that guy’s teeth. He went to Washington once and came back and complained that there were no statues of dentists.”

Tubby looked thoughtful. “They probably weren’t right up there on the front line,” he said. “They were fixing teeth back in the field hospitals.”

“Yes,” said Fatty. “Maybe they were. But we still need dentists.”

“We sure do,” said Tubby. “Thank God for dentists.”

“Okay,” said Porky. “We need dentists, but not everyone has to be a dentist, right?”

The three friends used to meet every other week to play poker. Fatty had also taught them Mah Jong, and they occasionally played that, although Tubby did not enjoy it as much as poker, which he almost always won. This was, in fact, a potential source of tension, as Tubby won so often that Porky began to suspect him of cheating. Fortunately he never made a direct accusation to this effect, as Tubby would never have done anything dishonest.
Betty thought Tubby the most handsome man she had ever met. She said that if Tubby had gone to Hollywood, he would almost certainly have been snapped up by the movie people. She once told Tubby this, at a party, and he laughed and said, “You’ve had too much to drink, Betty. I’d never have got far in the movies: those guys in the movies carry a bit less weight than I do.”

This is the story of the events that took place round Fatty’s fortieth birthday in the summer of 1979 when Fatty paid his first visit to Ireland. This trip was Betty’s fortieth birthday present to her husband, who had long talked about an Irish holiday but who had never seemed to find the time to organise one. Like Betty, Fatty considered himself every bit as Irish as he was American. His credentials for this identity were impeccable: not only was there his name, which was quintessentially Irish, but he could also point to the exact identity of the Irish forebear who had decided that enough was enough. This was his grandfather, also called Cornelius Patrick O’Leary - or Corny P. O’Leary, as he became known—who had emigrated from an obscure corner of County Tipperary to establish the family home in Fayetteville four years before the outbreak of the First World War. Arkansas, with its abundant supplies of timber, was an ideal place for the furniture factory that Corny set up. He had gone to America to get away from everything that he regarded as being wrong with Ireland—persistent rain, congenitally arrogant Anglo-Irish gentry, and a legion of squabbling relatives. Freed of Ireland, he became enthusiastically more Irish than ever before, and set to the establishing of a modest dynasty of O’Learys, centred upon the rambling double-storey house, Tipperary View, that he built in the centre of Fayetteville. It was not at all clear why he should have called the house this. It never had much of a view, and certainly not one of Tipperary, from which it was separated by three thousand miles of ocean and a considerable slice of the American continent; but, as Fatty once remarked to Betty, we see what see want to see in this life, and it was undoubtedly true that if his grandfather had dreamed of seeing anything, it would have been those soft and distant Irish hills.

As Fatty’s birthday approached, a visit to Ireland had not been the first possibility Betty explored. She had looked into the feasibility of a week or two in Honolulu, but had decided that Fatty would probably dislike this. Neither of them particularly took to crowds and busy hotels, and she was sure that they would find both of these in Hawaii. Besides, she knew that a trip to Ireland would enable Fatty to seek out the ancestral farm from which the original Cornelius O’Leary had set forth on the fateful day in July, 1910. It is possible that were still O’Learys there, and to locate some distant relatives would be an additional bonus. Fatty was proud of the O’Leary family, and would be delighted to make contact with any Irish cousins who might still be lurking in Tipperary. Betty was more cautious: she wondered what sort of un-enterprising people would choose to remain in Ireland when they could easily have left the country, even if only to take the ferry to Liverpool. Well, they would soon find out, and if the Irish relatives proved to be at all ... at all embarrassing they could be left right there. If, on the other hand they were promising, they might be persuaded to emigrate, as Betty assumed that all sensible Irish people had either already emigrated to America or were at least actively contemplating doing so. Indeed, it was quite surprising that anybody remained there at all, other than those few needed to act as curators.
Fatty was enthusiastic when he heard that Betty had booked the flights. They were to fly to Dallas and from there they would continue their journey to Shannon. There they could hire a car and drive the short distance to Tipperary.

“How do you picture Ireland, Fatty?” Betty asked dreamily. “Do you have a clear image of it?”

“I certainly do,” replied Fatty. “A lush green landscape, dotted with tiny white-washed cottages. And a patchwork of fields.”

“Marvellous!” said Betty. “Except perhaps for the rain.”

“Gentle rain,” went on Fatty, “barely noticeable, Irish rain—quite different from the rain we get out here. A little bit like whiskey, I think. Very weak, but still with the taste of the barley on it.”

Fatty shook his head fondly. “Oh, Betty,” he said, “you’re a genius to have thought of all this!”