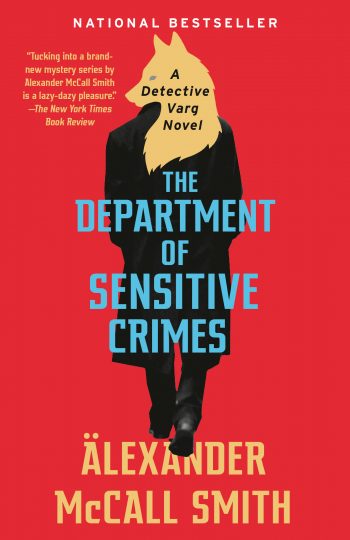 The Department of Sensitive Crimes is a Scandinavian Blanc novel. Scandinavian Blanc is different from Scandinavian Noir: there is nothing noir about the world of Ulf Varg, a detective in the Sensitive Crimes Department in the Swedish city of Malmo. Ulf is concerned with very odd, but not too threatening crimes – injuries to the back of the knee caused by an unknown hand, young women who allow their desperation for a boyfriend to get the better of them, and peculiar goings-on in a spa on Sweden’s south coast.

Of course, Ulf is a Swedish detective, and Swedish detectives, by convention, lead lives beset with problems of one sort or another. For a start, there is his name: Ulf derives from the Old Norse word for wolf and Varg means wolf in modern Swedish. But his character is far from vulpine: Ulf is a sympathetic, well-educated, and likeable man, with a knowledge of and interest in Nordic art. He has a dog called Marten, the only dog in Sweden who is capable of lip-reading (but only in Swedish). Marten becomes depressed and needs treatment. Dogs in Sweden are, apparently, particularly prone to Seasonal Affective Disorder. But this is summer – and there must be something else going on.
Ulf has a number of colleagues into whose lives we gain an insight. There is Anna, married to an anaesthetist, but very fond of Ulf; there is Erik, whose sole interest is fishing; Carl, whose father has written a book on the Danish philosopher, Kierkegaard; and there is poor Blomquist, from the uniformed branch, who goes on and on about health issues but who seems to have extraordinary luck in investigations. There is also Ulf’s psychotherapist, Dr Svensson, whose observations on Ulf’s life – and many other topics – enlightens – or possibly confuses.

‘Tucking into a brand-new mystery series by Alexander McCall Smith is a lazy-dazy pleasure . . . What binds the stories are the tight relationships of Varg and his colleagues and their hilariously human crotchets.’
Marilyn Stasio, The New York Times Book Review
‘As usual, the interpersonal relationships Smith so sensitively portrays and the ethical issues he raises matter far more than the sleuthing. Fans of gentle mysteries will look forward to the sequel.’
Publishers' Weekly
‘The chronicler of the No. 1 Ladies’ Detective Agency and 44 Scotland Street takes on Nordic noir. Guess who comes out on top.’
Kirkus Reviews
‘It’s like AA Milne meets Karl Ove Knausgaard. McCall Smith knows how to create a world full of sweet things and emotionally true moments and in this new series of “Scandi blanc” delivers exactly what his fans will be hoping for.’
The Financial Times
‘It’s hard to imagine a less dark Scandinavian police novel, or one that is more winning.’
Christian Science Monitor
‘This fan wishes that she had the money, youthful vigor and talent to bring this new book to the streaming world of modern-day television. Yes, it’s that good… If it is possible, Smith has outdone himself, and that is quite the accomplishment’
Book Reporter
‘Department of Sensitive Crimes will tickle your funny bone and resonate in your heart’
New York Journal of Books
‘McCall Smith’s humour is usually described as gentle, but readers familiar with the rhythm of his writing will find plenty here to make them snort… readers who get the joke – and it is a good one – will be eager for the next instalment’
The Scotsman
‘Equal parts hilarious and heartening… but most of all, I appreciated the philosophical underpinnings of the novel—a belief in goodness, kindness, and affirming joy’
Criminal Element
‘Stirring up werewolves, a depressed dog and lots of fun… The author of more than 80 books has not lost his literary touch, but his latest account of the doings at Sweden’s Department of Sensitive Crimes hits a new high of hilarity’
Washington Times
‘Prescription for a soul that feels the world is too hard a place to bear: Make a soothing cup of tea and snuggle up with The Department of Sensitive Crimes… Reading a novel by Alexander McCall Smith feels as if a soothing balm is being applied to all the hurts and injuries inflicted by the world around us. This may be a new series set in Sweden, but it carries all the hallmarks of a McCall Smith story: plenty of heart and quiet wisdom’
A Limelight Review, SMSA, Sydney
‘Ever since Stieg Larsson let loose the avenging angel Lisbeth Salander, Sweden has been painted in the darkest shades of noir in fiction in spite of that country having one of the lowest crime rates in the world… Alexander McCall Smith sets the record straight with panache’
The Hindu
Close