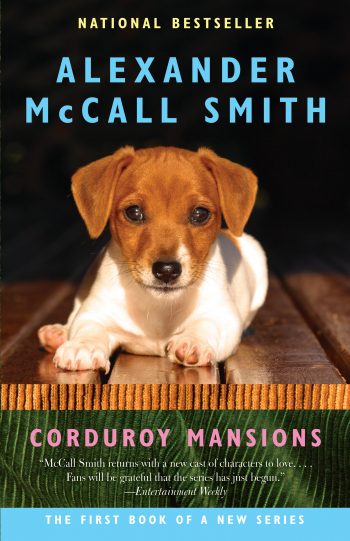 The first book in the Corduroy Mansions series

William French lives in the top flat of Corduroy Mansions with his faithful ex-vegetarian dog Freddie de la Hay and a freeloading son he hopes will soon fly the nest. On the first floor reside a group of lively young women including twinset-and-pearls Caroline from Cheltenham, vitamin-addict Dee, and put-upon PA Jenny.

Round the corner lives Oedipus Snark MP, possibly the world’s only loathsome Lib Dem, who has succeeded in offending everyone he knows, and many others besides. But what dark revenge is being plotted by his mother Berthea Snark, and by his girlfriend, Barbara Ragg?

First published as a serial podcast audiobook in partnership with the Daily Telegraph, these delightful stories are now a series of bestselling novels.

“Bags of warmth and wisdom and easy, accomplished writing that begs for a comfy chair”
The Times
“Corduroy Mansions is like the cloth of its title—comfortable, easy, homey. Illustrated whimsically by Iain McIntosh, these short chapters or vignettes evoke the serial magazine writing of another era”
The Washington Post
“McCall Smith is a writer of such fond, heartfelt geniality that … fans will be grateful that the series has just begun”
ENTERTAINMENT WEEKLY

Passing off, thought William. Spanish sparkling wine—filthy stuff, he thought, filthy—passed itself off as champagne. Japanese whisky—Glen Yakomoto!—was served as Scotch. Inferior hard cheese—from Mafia-run factories in Catania—was sold to the unsuspecting as Parmesan. Lots of things were passed off in one way or another, and now, as he stood before the bathroom mirror, he wondered if he could be passed off too. He looked at himself, or such part…
Read More

Lots of things were passed off in one way or another, and now, as he stood before the bathroom mirror, he wondered if he could be passed off too. He looked at himself, or such part of himself as the small mirror encompassed—just his face, really, and a bit of neck. It was a fifty-one-year-old face chronologically, but would it pass, he wondered, for a forty-something-year-old face?

He looked more closely: there were lines around the eyes and at the edge of the mouth but the cheeks were smooth enough. He pulled at the skin around the eyes and the lines disappeared. There were doctors who could do that for you, of course: tighten things up; nip and tuck. But the results, he thought, were usually risible. He had a customer who had gone off to some clinic and come back with a face like a Noh-play mask—all smoothed out and flat. It was sad, really. And as for male wigs, with their stark, obvious hairlines, all one wanted to do was to reach forward and give them a tug. It was quite hard to resist, actually, and once, as a student—and when drunk—he had done just that. He had tugged at the wig of a man in a bar and ... the man had cried. He still felt ashamed of himself for that. Best not to think about it.

No, he was weathering well enough and it was far more dignified to let nature take its course, to weather in a National Trust sort of way. He looked again at his face. Not bad. The sort of face, he thought, that would be hard to describe on the Wanted poster, if he were ever to do anything to merit the attention of the police—which he had not, of course. Apart from the usual sort of thing that made a criminal of everybody: “Wanted for illegal parking,” he muttered. “William Edward French (51). Average height, very slightly overweight (if you don’t mind our saying so), no distinguishing features. Not dangerous, but approach with caution.”

He smiled. And if I were to describe myself in one of those lonely hearts ads? Wine dealer, widower, solvent late forties-ish, GSOH, reasonable shape, interested in music, dining out etc., etc., WLTM presentable, lively woman with view to LTR.

That would be about it. Of course one had to be careful about the choice of words in these things; there were codes, and one might not be aware of them. Solvent was clear enough: it meant that one had sufficient money to be comfortable, and that was true enough. He would not describe himself as well off, but he was certainly solvent. Well off, he had read somewhere, now meant disposable assets of over ... how much? More than he had, he suspected.

And reasonable shape? Well, if that was not strictly speaking true at present, it would be shortly. William had joined a gym and been allocated a personal trainer. If his shape at present was not ideal, it soon would be, once the personal trainer had worked on him. It would take a month or two, he thought, not much more than that. So perhaps one might say, shortly to be in reasonable shape.

Now, what about: would like to meet presentable, lively woman. Well, presentable was a pretty low requirement. Virtually anybody could be presentable if they made at least some effort. Lively was another matter. One would have to be careful about lively because it could possibly be code for insatiable, and that would not do. Who would want to meet an insatiable woman? My son, thought William suddenly. That’s exactly the sort of woman Eddie would want to meet. The thought depressed him.

William lived with his son. There had been several broad hints dropped that Eddie might care to move out and share with other twenty-somethings, and recently a friend of Eddie’s had even asked him if he wanted to move into a shared flat, but these hints had apparently fallen on unreceptive ground. “It’s quite an adventure, Eddie,” William said. “Everybody at your stage of life shares a flat. Like those girls downstairs. Look at the fun they have. Most people do it.”

William sighed. “My circumstances, Eddie, were a bit different.”

“You lived with Grandpa until he snuffed it.”

“Precisely. But I had to, don’t you see? I couldn’t leave him to look after himself.”

“But I could live with you until you snuff it.”

“That’s very kind of you. But I’m not planning to snuff it just yet.”

Then there had been an offer to help with a mortgage—to pay the deposit on a flat in Kentish Town. William had even gone so far as to contact an agent and find a place that sounded suitable. He had looked at it without telling Eddie, meeting the agent one afternoon and being shown round while a litany of the flat’s—and the area’s—advantages was recited.

William had been puzzled. “But it doesn’t appear to have a kitchen,” he pointed out.

The agent was silent for a moment. “Not as such,” he conceded. “No. That’s correct. But there’s a place for a sink and you can see where the cooker used to be. So that’s the kitchen space. Nowadays people think in terms of a kitchen space. The old concept of a separate kitchen is not so important. People see past a kitchen.”

In spite of the drawbacks, William had suggested that Eddie should look at the place and had then made his proposition. He would give him the deposit and guarantee the mortgage.

Eddie looked doubtful. “But it hasn’t got a kitchen, Dad. You said so. No kitchen.”

William took this in his stride. “It has a kitchen space, Eddie. People see past an actual kitchen these days. Didn’t you know that?”

But Eddie was not to be moved. “It’s kind of you, Dad. I appreciate the offer, but I think it’s premature. I’m actually quite comfortable living at home. And it’s greener, isn’t it? Sharing. It makes our carbon footprint much smaller.”

And so William found himself living with his twenty-four-year-old son. Wine dealer, he thought, would like his son to meet a lively woman with view to his moving in with her. Permanently. Any area.

He turned away from the bathroom mirror and stooped down to run his morning bath. It was a Friday, which meant that he would open the business half an hour late, at ten-thirty rather than ten. This meant that he could have his bath and then his breakfast in a more leisurely way, lingering over his boiled egg and newspaper before setting off; a small treat, but a valued one.

There was a knocking on the door, soft at first and then more insistent.

“You’re taking ages, Dad. What are you doing in there?”

He did not reply.

“Dad? Would you mind hurrying up? Or you want me to be late?”

William turned and faced the door. He stuck out his tongue.

“Don’t be so childish,” came the voice from the other side of the door.