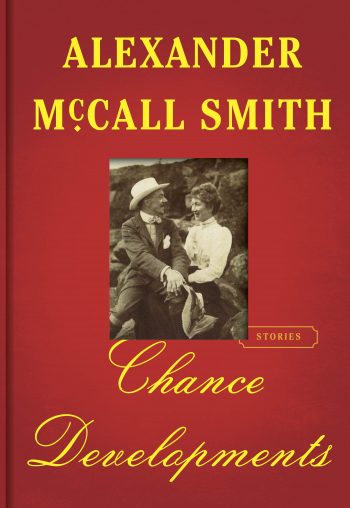 A picture may be worth a thousand words—but an old photograph may inspire even more. In this beguiling book, Alexander McCall Smith casts his eye over five chanced-upon photographs from the era of black-and-white photography and imagines the stories behind them. Who were those people, what were their stories, why are they smiling, and what made them sad? What emerges are five lyrical and poignant tales in a variety of settings: an estate in the Highlands of Scotland, a travelling circus in Canada, an Australian gold-mining town, a village in Ireland, and the Scottish capital, Edinburgh.

Charming and poignant, these stories capture the surprising intersections of love and friendship that alter life’s journeys. They are a testament to the power of human connection, and brim with a grace and humour that could only come from the pen of Alexander McCall Smith.

“The two most memorable stories are Angels In Italy and He Wanted To Believe In Tenderness. It’s impossible to say much about the former without giving away the ending, but the latter is a profoundly moving exploration of the idea that, sometimes, love really can conquer all”
The Scotsman
“Alexander McCall Smith has transformed five forgotten photos into a discovery of delight”
lovereading.co.uk
“These stories are full of insight and empathy … Works of depth and beauty that would not be shamed in the company of the world’s great short stories”
The Sydney Morning Herald
“These stories trust in the liberal, humane values that are at the heart of all McCall Smith’s fiction. Can one have too much of that hopefulness? I doubt it”
The New York Times Book Review
“The book is vintage McCall Smith and if anyone is looking for an early Christmas gift, they should look no further. A reader may wonder whether if there were no Alexander McCall Smith, he would have to be invented”
Washington Times
‘Alexander McCall Smith and his wonderful imagination delights my soul. I just read Chance Developments and made even more new friends’
Reader comment on Facebook
‘the stories are filled with the weight of real life and how chance finds its way in, no matter how we attempt to plan otherwise. Both uplifting and at times bittersweet and emotional, this collection is sure to delight both Smith fans and newcomers alike.’
Publishers Weekly

They did their best to be generous to Sister Flora when she left the convent, but the dresses they gave her left something to be desired. A great deal, in fact, according to some. “Well!” muttered one of the laywomen who helped with the vegetable garden. “Did you see the outfits they gave her? You wouldn’t think it was 1961—more like 1931!” She was right about the dresses, of which…
Read More

They did their best to be generous to Sister Flora when she left the convent, but the dresses they gave her left something to be desired. A great deal, in fact, according to some.

“Well!” muttered one of the laywomen who helped with the vegetable garden. “Did you see the outfits they gave her? You wouldn’t think it was 1961—more like 1931!”

She was right about the dresses, of which there were two. Both had been donated to the convent by the women’s guild at the local church, and both were irretrievably dull. One was made of beige bombazine, the other of a rough wool fabric of the sort that a rural schoolmistress might have worn decades earlier. Both had been retrieved from somebody’s wardrobe, both had a faint odour of camphor, although neither appeared to have suffered any moth damage.

They also gave her an unbecoming grey cardigan, a plain, full-length coat, and a pair of shoes that was slightly too small. The shoes, at least, were new, although they, too, were far from fashionable. Then there was a small suitcase, a sponge bag of toiletries, and an envelope containing fifteen pounds.

“We might have entertained the possibility of giving you a slightly larger sum,” said the Mother Superior, “but since you are going to be living with your aunt you will have no rent to pay and I imagine your aunt, being the pious woman she is, will provide necessities.”

Flora smiled. “I don’t really deserve anything,” she said. “I brought nothing with me when I came ten years ago, and I don’t think I should leave with anything.”

“That’s a very good attitude,” the Mother Superior continued. “Mind you, I gather that money is not going to be a problem. This sum is purely to tide you over until such time as your ... your arrangements are in place.”

“I have been most fortunate,” she said. “I am not intending to forget that, Mother.”

“No,” said the Mother Superior. “I don’t imagine you will. You always had a very good disposition, you know. I’m sorry that one or two people have been passing ... well, what can only be described as uncharitable remarks.” She looked away, her lips pursed in disapproval. “I heard somebody say they thought that money had interfered with God’s plan for you.”

“Neither do I,” said the Mother Superior. “And indeed I imagine there are circumstances that suggest that God’s plan for certain people is that they should have money. After all, if nobody had any money, then who would give to the Holy Church?”

The Mother Superior looked out of the window. “I was very reassured to hear that you hadn’t lost your faith. That was a great comfort to me, you know.”

“I haven’t lost it,” said Flora. “It’s just that ... oh, I suppose it’s just that I decided that I’m not cut out for the religious life. I’ve enjoyed it well enough, but I feel that somehow life is passing me by.”

“Quite understandable, my child,” said the Mother Superior.

“And I thought that I really had to make a decision one way or the other. So I decided that I would go out into the world. It just seemed the right thing for me to do.”

“We all understand,” said the Mother Superior. “I understand; poor Sister Frances understands—just; and Father Sullivan understands. You’ll be happy doing God’s work for you in the wider world—whatever that happens to be.”

“And, of course,” continued the Mother Superior, “you will be a wealthy woman.”

Sister Flora lowered her eyes. “I didn’t reach the decision because of that,” she said. “I had already decided.”

“Oh, I know that,” said the Mother Superior. “I wasn’t for a moment suggesting post hoc, propter hoc. But being wealthy will be ... well, rather nice, don’t you think?”