Bertie’s Guide to Life and Mothers 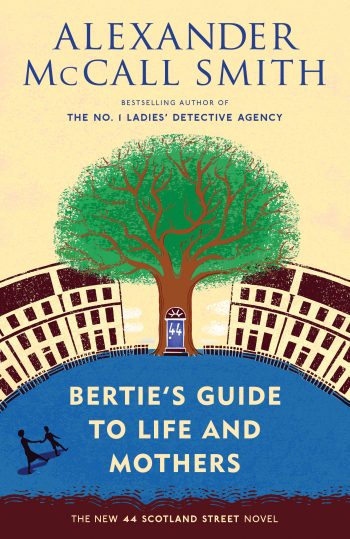 Bertie’s Guide to Life and Mothers

The ninth book in the 44 Scotland Street series

Summer blooms in Edinburgh and Bertie Pollock’s birthday appears on the horizon, but it’s not all cake and sunshine at 44 Scotland Street. Angus Lordie’s new wife has booked him into an institution that he must not call the loony bin and Bruce’s first encounter with hot wax brings more anguish than he bargained for.

Meanwhile Bertie’s birthday dreams of scout camp and a penknife may have to be replaced by a game of Royal Weddings and a gender-neutral doll. But fate, an amorous Bedouin, and the Dubai Tourist Authority conspire to transport Bertie’s mother Irene to a warmer place.

Bertie Pollock (6) was the son of Irene Pollock (37) and Stuart Pollock (40), and older brother of Ulysses Colquhoun Pollock (1). Ulysses was also the son of Irene but possibly not of Stuart, the small boy bearing a remarkable resemblance to Bertie's psychotherapist, recently self-removed from Edinburgh to a university chair in Aberdeen. Stuart, too, had been promoted, having recently been moved up three rungs on the civil service…
Read More

Bertie Pollock (6) was the son of Irene Pollock (37) and Stuart Pollock (40), and older brother of Ulysses Colquhoun Pollock (1). Ulysses was also the son of Irene but possibly not of Stuart, the small boy bearing a remarkable resemblance to Bertie's psychotherapist, recently self-removed from Edinburgh to a university chair in Aberdeen. Stuart, too, had been promoted, having recently been moved up three rungs on the civil service ladder after incurring the gratitude of a government minister. This had happened after Stuart, in a moment of sheer frustration, had submitted the numbers from The Scotsman's Sudoku puzzle to the minister, representing them as likely North Sea oil production volumes. He had immediately felt guilty about this adolescent gesture—Homo ludens, playful man, might be appreciated in the arts but not in the civil service - and had he been able to retract the figures he would have done so. But it was too late; the minister was delighted with the encouraging projection, with the result that any confession by Stuart would have been a career-terminating event. So he remained silent, and was immensely relieved to discover later that the real figures, once unearthed, were so close to his Sudoku numbers as to make no difference. His conscience was saved by coincidence, but never again, he said to himself.

Irene had no interest in statistics and always adopted a glazed expression at any mention of the subject. “I can accept that what you do is very important, Stuart,” she said, in a pinched, rather pained tone, “but frankly it leaves me cold. No offence, of course.”

Her own interests were focused on psychology—she had a keen interest in the writings of Melanie Klein—and the raising of children. Bertie's education, in particular, was a matter of great concern to her, and she had already written an article for the journal Progressive Motherhood, in which she had set out the objectives of what she described as ‘the Bertie Project’.

“The emphasis,” she wrote, “must always be on the flourishing of the child's own personality. Yet this overriding goal is not incompatible with the provision of a programme of interest-enhancement in the child herself,” (Irene was not one to use the male pronoun when a feminine form existed). “In the case of Bertie, I constructed a broad and fulfilling programme of intellectual stimulation introducing him at a very early stage (four months) to the possibilities of theatre, music and the plastic arts. The inability of the very small infant to articulate a response to the theatre, for example, is not an indication of lack of appreciation—far from it, in fact. Bertie was at the age of four months taken to a performance by the Contemporary Theatre of Krakow at the Edinburgh Festival and reacted very positively to the rapid changes of light on the stage. There are many other examples. His response to Klee, for instance, was noticeable when he was barely three, and by the age of four he was quite capable of distinguishing Peploe from Matisse.”

Some of these claims had some truth to them. Bertie was, in fact, extremely talented, and had read way beyond what one might expect to find in a six-year-old. Most six-year-olds, if they can read at all, are restricted to the doings of Spot the Dog and other relatively unsubtle characters; Bertie, by contrast, had already consumed not only the complete works of Roald Dahl for children, but also half of Norman Lebrecht's book on Mahler and almost seventy pages of Miranda Carter's biography of the late Anthony Blunt. His choice of this reading, which was prodigious on any view, was dependent on what he happened to find lying about on his parents' bookshelves, and this was, of course, the reason why he had also dipped into several volumes of Melanie Klein and was acquainted too with a number of Freud's accounts of his famous cases, especially those of Little Hans and the Wolf Man.

Little Hans struck Bertie as being an entirely reasonable boy, who had just as little need of analysis as he himself had.

“I think Dr Freud shouldn't have worried about that boy Hans,” Bertie remarked to his mother, as they made their way one afternoon to the consulting rooms of Bertie's psychotherapist in Queen Street. “I don't think there was anything wrong with him, Mummy, I really don't.”

“That's a matter of opinion, Bertie,” answered Irene. “And actually it's Professor Freud, not Dr Freud.”

“Well,” said Bertie. “Professor Freud then. Why does he keep going on about ... ” He lowered his voice, and then became silent.

“About what, Bertie?” asked Irene. “What do you think Professor Freud goes on about?”

Bertie slowed his pace. He was looking down at the ground with studious intensity. “About bo ... ” he half-whispered. Modesty prevented his completing the sentence.

“About what, Bertie?” prompted Irene. “We mustn't mumble, carissimo. We must speak clearly so that others can understand what we have to say.”

Bertie looked anxiously about him. He decided to change the subject. “What about my birthday, Mummy?” he said.

Irene looked down at her son. “Yes, it's coming up very soon, Bertie. Next week, in fact. Are you excited?”

Bertie nodded. He had waited so long for this birthday—his seventh—that he found it difficult to believe that it was now about to arrive. It seemed to him that it had been years since the last one, and he had almost given up on the thought of turning seven, let alone eighteen, which he knew was the age at which one could leave one's mother. That was the real goal—a distant, impossibly exciting, shimmering objective. Freedom.

“Will I get any presents?” he asked.

Irene smiled. “Of course you will, Bertie.”

"I'd like a Swiss Army penknife," he half-whispered. “Or a fishing rod.”

“Other boys have these things,” Bertie pleaded.

Irene pursed her lips. “Other boys? Do you mean Tofu?”

“Well the less said about him the better,” said Irene. She sighed. Why did men—and little boys too—have to hanker after weapons when they already had their ... She shook her head in exasperation. What was the point of all this effort if, after years of striving to protect Bertie from gender stereotypes, he came up with a request for a knife? It was a question of the number of chromosomes, she thought: therein lay the core of the problem.