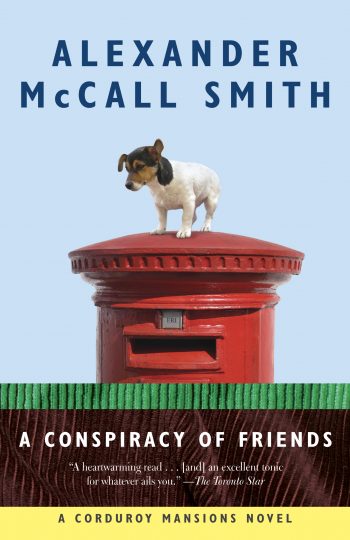 The third book in the Corduroy Mansions series

The fine, but crucial line between friendship and romance has become somewhat blurred to fine art graduate Caroline, and over at the Ragg Porter Literary Agency a business rivalry leads to an unseemly tussle over the ownership of Autobiography of a Yeti.

In the Snark household, psychoanalyst Berthea suffers on two fronts: her brother Terence Moongrove indulges his penchant for fast cars, whilst her son Oedipus Snark MP, is the unacceptable face of the Liberal Democrats. Even easy-going wine merchant William finds his loyalties and his troubles increase when his faithful Pimlico terrier, Freddie de la Hay, disappears on a mystery tour around the surrounding countryside. Will he find his way back?

“Even if other novelists were writing about Pimlico terriers and their owners, I doubt whether any of them could do so with McCall Smith’s gentle wit, intelligence and moral grace”
Scotsman
“McCall Smith continues the easy, amusing form that won him so many fans with the No. 1 Ladies’ Detective Agency and creates characters that linger long in the mind”
Manchester Evening News
“Teeming with charm”
Publishers Weekly US
“A Conspiracy of Friends, Alexander McCall Smith’s latest novel, is a heart-warming read. That’s not an adjective that reviewers apply often—but in this case, I was smiling when I finished the story. Like most of what McCall Smith writes, the book is an excellent tonic for whatever ails you”
Toronto Star

Oedipus Snark had a number of distinctions in this life. Then first of these—and perhaps the most remarkable—was that he was, by common consent, the only truly nasty Liberal Democrat Member of Parliament. This was not just an accolade bestowed upon him by journalists in search of an amusing soubriquet, it was a judgement agreed upon by all those who knew him, including, most notably, his mother. Berthea Snark, a…
Read More

Oedipus Snark had a number of distinctions in this life. Then first of these—and perhaps the most remarkable—was that he was, by common consent, the only truly nasty Liberal Democrat Member of Parliament. This was not just an accolade bestowed upon him by journalists in search of an amusing soubriquet, it was a judgement agreed upon by all those who knew him, including, most notably, his mother. Berthea Snark, a well-known psychoanalyst who lived in a small, undistinguished mews house behind Corduroy Mansions, had tried very hard to love her son, but had eventually given up, thus joining that minuscule group—mothers who cannot abide their sons. So rare is the phenomenon, and so willing are most mothers to forgive their sons any shortcoming, that this demographic—that is to say, in English, these people—is completely ignored by marketeers. And that, as we all know, is the real test of significance. If marketeers ignore you, you are not worth bothering about; you are nothing; you are—to put it brutally—a non-demographic. So intense was Berthea’s distaste for her son that she had once seriously contemplated arranging a DNA test to see whether there was any chance that Oedipus had been mixed up with her real infant in hospital and given to the wrong mother. She knew that this was clutching at straws, but she had read about such errors in a popular psychology magazine and concluded that there was a chance, just a chance, that it had happened to her. The author of the article had for years researched the psychological profile of those who had lived a large part of their life under a false belief as to the identity of their father and had only later discovered the mistake. In the course of discussing this not entirely uncommon problem, the author had casually mentioned two cases of a rather different error, where the woman thought to be mother was discovered not to be mother after all.

One of these cases had been of a boy who had been given by his mother to her sister in an act of generosity. The donor, who had six children already, had decided that her childless sister’s need for a baby was greater than her own and had generously—and not without some relief—donated this seventh child. It had worked to the satisfaction of all, and when the truth slipped out—as the truth sometimes does in spite of our best efforts to conceal it—the reaction of the boy, now a young man of eighteen, had been admirable. There had been no recriminations, or sense of betrayal: he had gone straight to the florist, purchased a large bouquet of flowers and handed it to the woman who he had assumed all those years was his real mother. Love, he had written on the accompanying card, is thicker than blood. Berthea could not imagine Oedipus doing such a thing. In fact, she found it difficult to remember when her son had last given her a present; not that she held it against him, even if she had noted it as a point that she might at least touch upon in a suitable chapter of the unauthorised biography of him that she was currently writing. And here was the second of his distinctions: there are few, if any, examples of hostile biographies written by mothers. Berthea, though, was well advanced in her plans, and the manuscript of the work provisionally entitled My Son Oedipus was already two hundred and ten typewritten pages long.

Those pages took us only as far as the end of Oedipus’s schooldays. He had been sent to boarding school when he was ten, spending a short time at a very dubious prep school in the West Country before winning a scholarship to Uppingham.

The prep school, now closed down by the authorities, was found to be a money-laundering scheme dreamed up by an Irish racehorse owner; and while the boys were for the most part entirely happy (not surprisingly, given that the headmaster took them to the racetrack three times a week), their education left a great deal to be desired. Oedipus, though, had thrived, and had won the Uppingham scholarship by arranging for another boy at the school, an intellectual prodigy, to impersonate him in the scholarship examination. This had the desired result and brought, rather to the surprise of his mother, an offer of a full scholarship, covering the cost of tuition and
boarding. “I know I’m failing as a mother,” Berthea confessed to a friend at the time. “I’m perfectly aware of that. But, quite frankly, much as I love my son, I’m always relieved when Oedipus goes off to school. I know I shouldn’t feel this, but it’s as if a great load is lifted from my shoulders each time I see him off. I feel somehow liberated.”

“I’m not surprised,” said the friend. “And you mustn’t reproach yourself. Your son is a particularly unpleasant child—I’ve always thought so.”

This verdict on Oedipus was shared by almost all his contemporaries at school. When Berthea had advertised in the school association magazine for “recollections—no matter how frank—of the schooldays of Oedipus Snark, MP”, she had been astonished by the unanimity of opinion.

“I remember Oedipus Snark quite well,” wrote one of her informants. “He was the one we all disliked intensely. I’m sorry to have to tell you this, as I gather that you’re his mother, but we really couldn’t stand the sight of him. What on earth possessed you to have him?”

And there was this from another: “Can you give me his current address? I promise I won’t pass it on to anybody. I just want to know—for my own purposes.”

Of course, Berthea did not pass on her son’s address to that particular correspondent. She did not want Oedipus to meet any physical misfortune; she wanted him simply to be exposed, to be made to confront his shortcomings, to accept responsibility. And was there anything wrong with that? she wondered. Does it make me any the less of a mother for wanting to see justice done?

She had thought long and hard about what it was to be a mother. And from that, inspired by the article she read about disproof of maternity, the idea came to her that there had been a fairly long pause between the point at which Oedipus was taken from her in the maternity ward and the moment he was returned to her bedside. It was, she remembered, at least an hour, and during that time, as a nurse informed her, another three babies had been born.

“We’ve been worked off our feet, Mrs Snark,” said the nurse.

“Four babies in two hours! All of them boys. A population explosion, that’s what it is.”

Berthea now thought: four boys, all lying in those tiny cots they put newborn babies in; physically indistinguishable, at that age, one from the other; identified only by a little plastic bracelet which could so easily slip off, be picked up and put on the wrong baby. Surely it could happen. Or was that just wishful thinking?