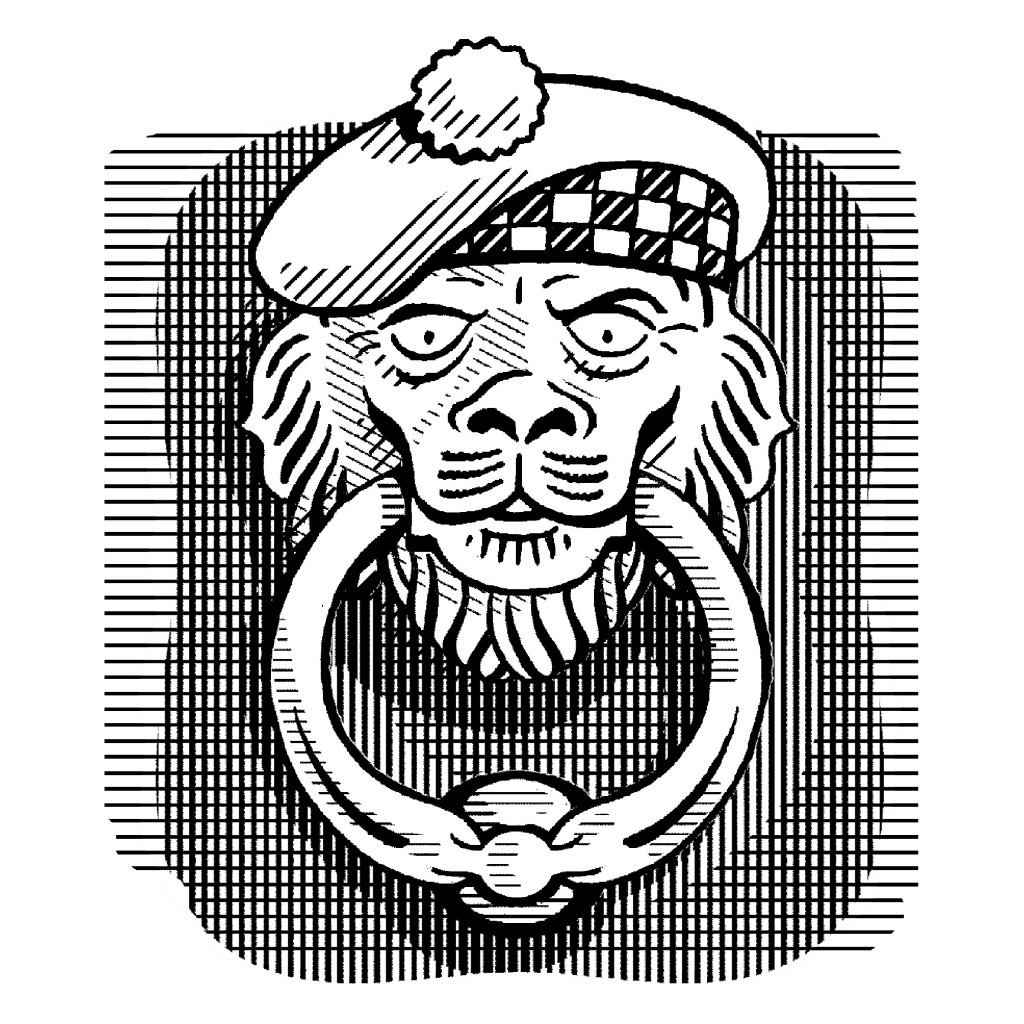 A preview from The Bertie Project.

In the flat immediately below Angus and Domenica’s, Bertie Pollock (7), the son of Stuart and Irene Pollock, and brother of Ulysses (1), was sitting on the floor attempting to complete a jigsaw puzzle. The picture in the puzzle was a distant view of Stirling Castle, with the curious tower of the Wallace Monument in the background. Unfortunately for Bertie, several pieces of the jigsaw were missing, including half of the Wallace Monument and several important parts of the castle’s defences.

Irene was browsing through various magazines that had arrived during her recent prolonged absence in the Middle East, where, owing to a misunderstanding with a Bedouin sheikh and his staff, she had been sequestered for months in a remote desert harem. Now back in Edinburgh, remarkably unaffected by her experience – durance it might have been, but hardly vile – she was busy catching up with things that had happened while she was away.

“I’m not going to be able to finish this puzzle, Mummy,” said Bertie from his position on the floor. “There are ten really important pieces missing. I’ve counted them.”

“Ten?” said Irene. “You should take more care of these things, you really should. If we all lost our jigsaw pieces, then nobody would be able to complete a puzzle, would they, Bertissimo?”

Bertie smarted under the injustice of the accusation. “But it wasn’t me,” he protested. “It was Ulysses. He ate them. I saw him spit some of them out, all chewed up. I saw it, Mummy. And that piece over there – the top of the Wallace Monument – he swallowed it. I saw him do it.”

Irene glanced at Stuart, who was sitting on the other side of the room tapping an e-mail into his laptop computer.

“Oh, really,” said Irene, becoming severe. “You shouldn’t have let your brother swallow things, Bertie. We’re old enough to prevent such things, aren’t we? Seven is old enough to take on responsibilities like that.”

“But I wasn’t looking after him,” said Bertie. “Daddy was.”

Stuart looked up from his computer, but said nothing.

“Stuart,” said Irene, her voice quiet enough, but now carrying a note of menace. “Bertie says that Ulysses ate the Wallace Monument. Surely you must have noticed.”

Stuart looked evasive. “He’s always putting things in his mouth. It’s difficult sometimes … I don’t know why he does it.”

Irene put down her magazine. “It’s perfectly normal, Stuart. Oral gratification.” She spoke patiently, as if explaining something simple to one who might nonetheless not quite grasp

it. “And during that stage we must be especially vigilant.”

It was a reproof – Stuart was in no doubt about it – but he had learned not to argue with Irene. What was the point? Resistance, he felt, often just made matters worse.

“Granny stuck a dummy in his mouth,” said Bertie. “That stopped his girning. It also stopped him swallowing things.”

Stuart glanced at Bertie, as if to warn him – but it was too late.

“Do I understand correctly,” she said, glaring at Stuart, “that your mother put a dummy in Ulysses’s mouth?”

It was Bertie who answered. Eager to protect his father, he brought up something he had heard at school from Pansy, whose mother was American. “You know what they call

those things in America? They call them soothers.” He felt increasingly concerned for his father; Irene was now glaring at Stuart. “I read that the German word for dummy is Schnuller, Mummy. Did you know that? That’s because …”

This did not distract his mother. “Stuart,” she said, ominously.

Bertie persisted. “And he really loved it. Babies like dummies, Mummy. Pansy’s little sister used one until she was five.”

Irene ignored this. “Stuart,” she said. “I thought I had made our policy crystal clear. No dummies.”

Stuart fixed his gaze on his computer screen.

“Stuart,” hissed Irene. “We need to talk. In the kitchen.”

Sensing the danger his father was in, Bertie suggested his parents could talk where they were. And then he added, “It was my fault, Mummy. I told her he wanted one.”

But Irene was already on her feet, signalling to Stuart. Bertie sighed, and returned to his puzzle. The Wallace Monument looked odd enough, he thought, even when complete; without its crown spire and top section it looked even odder – rather like an overgrown grain elevator. He wondered whether he could draw a substitute piece, or perhaps cut a photograph out of a brochure and repair the puzzle that way.

Ulysses was all right as a brother, he thought, but he had no respect for other people’s property. This worried Bertie, as he was a prodigious reader and had recently read something about psychopaths. The article had said nothing about baby psychopaths, but presumably they existed, as adult psychopaths must have been babies at some stage. If Ulysses was a psychopath, as seemed likely to him, then Bertie felt he was in for a difficult few years, having to protect his property against the depredations of a younger psychopathic sibling. Perhaps he could be kept locked in his room, thought Bertie. He could be let out for meals and for short expeditions to Valvona & Crolla, chained to his pushchair if necessary, but for the most part he would have to be kept confined. He would be kind to him, of course, and pass on his older toys, but it seemed to him that community safety should come first.

Behind the closed door of the kitchen, Irene confronted Stuart in a lowered, but chilling tone.

“Your mother, Stuart …” she began.

He swallowed. His mother had provided a lifeline. “ …was very helpful,” he interjected. “She came to our rescue. How could I have looked after Bertie and Ulysses and gone to work? She saved the day.”

“I’m not denying she helped,” said Irene. “But you could have found somebody local. There are plenty of local girls looking for this sort of job.”

The way that Irene said local girls irritated Stuart. There was an ocean of condescension, he felt, in those two words.

“Local girls,” he began. “By that I take it you mean proletarian.”

“Oh, don’t be ridiculous, Stuart. You know my political views. I identify with the proletariat.”

Stuart’s eyes widened. Irene had been brought up in Moray Place. Whatever that was, by no stretch of the imagination was it proletarian. “From somewhere like Muirhouse?” Stuart persisted. “Is that what you meant?”

Irene’s voice turned into a hiss. “Don’t try to obscure the issue, Stuart. The point is that your mother clearly has all the wrong ideas about child-rearing – just as I expected.”

“She raised me,” said Stuart.

“And she was a very good mother,” continued Stuart.

“Dummies!” exploded Irene. “Dummies are a way of shutting the child up, of distracting her from engagement with the world. You may as well plug the child into the television

set.” She paused. “I take it she didn’t allow the boys to watch television?”

We hope you enjoyed this opportunity to read a preview from The Bertie Project.

A Story for June: Woman with Beautiful Car
A Story for August: A preview from The House of Unexpected Sisters